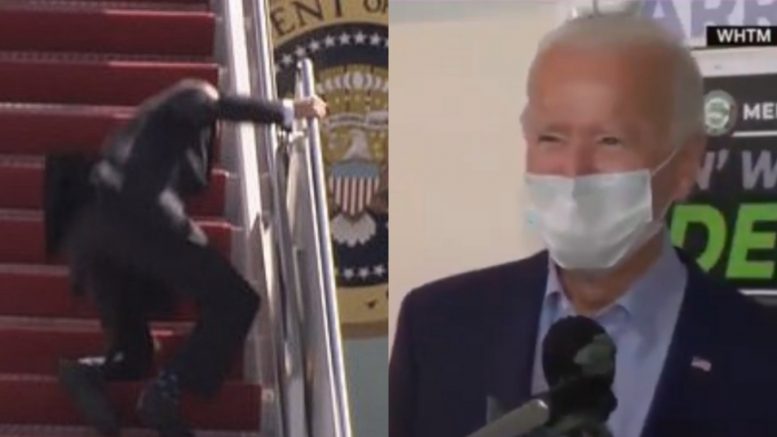 A video has resurfaced showing Joe Biden appearing to brag about his ability to ‘run up’ inclined surfaces.

Biden — who stumbled on the stairs multiple times while boarding Air Force One on Friday — boasted to a reporter, on the campaign trail, about his physical ability to travel on a slope compared to President Trump.

“Look at how he steps and look at how I step,” Biden is heard saying with a chuckle. “Watch how I run up ramps and he stumbles down ramps, okay…Come on!”

Biden Boasts About His Ability To Run Up A Ramp

Biden previously bragged about his ability to climb stairs. So it’s fair game. Someone should ask him about this at his press conference. pic.twitter.com/HdGt7NzcIV

Related Article: Don Jr. Reacts As Biden Repeatedly Falls On Stairs While Boarding Air Force One: “No Wonder All Our Enemies Are Mocking Him Publicly”
Mr. Biden’s personal thoughts about himself just months ago are a stark contrast to what millions of Americans actually witnessed on Friday when he stumbled on the stairs while en route to Air Force One.

In ending, here is a video meme that has since gone viral since Biden’s humiliating stumble: