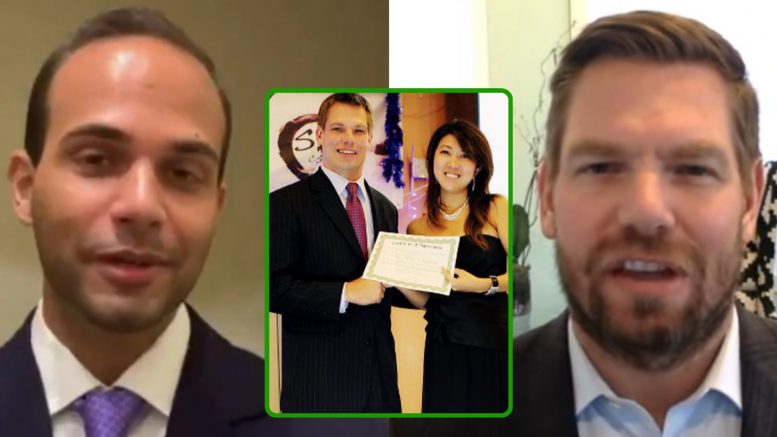 “He was and is compromised by a very hostile power,” former Trump campaign advisor George Papadopoulos declared in response to the House voting to reject a resolution to remove Congressman Eric Swalwell from the intelligence panel.

House Minority Leader Kevin McCarthy introduced the resolution after House Speaker Nancy Pelosi (D-CA) reappointed Swalwell to the House Intelligence Committee following reports that he may have been compromised by a suspected Chinese Communist Party spy.

According to a report by Axios that was released in December, Rep. Eric Swalwell was closely connected to a Chinese national named Fang Fang — aka Christina Fang — an alleged operative for China’s Ministry of State Security, which is the country’s intelligence organization.

Fang first interacted with the California representative in the early stages of his political career when he served on the Dublin City Council in California, and right before being elected to the U.S. House of Representatives in 2012. Swalwell didn’t cut ties from Fang until 2015 after the FBI provided a “defensive briefing” to him in regards to the Chinese national’s activities that they had been monitoring, as reported by The Freedom Times.

According to Forbes: “The vote came down almost entirely along party lines, with 218 Democrats voting to table the resolution and 200 Republicans voting to consider it – though 3 voted present: Reps. Kelly Armstrong (R-N.D.), David Joyce (R-Ohio) and Michael Guest (R-Miss.).” Continued Below

In reaction to the House defeating McCarthy’s resolution, George Papadopoulos stated as follows to Newsmax:

“The Democrats have mastered the art of projection when it comes to targeting Republicans or trying to cover up their own mistakes. We can’t forget that Congressman Swalwell was one of the greatest purveyors of the criminal conspiracy theory about the Trump campaign colluding with the Russians at a time when he actually had declassified material that completely debunked that nonsense. Yet, he continued to propogate this fantasy on national television to the extent that he likely — him and his cohorts — impacted the last midterms and the presidential election.”

“But his projection obviously caught up with him because Fang Fang compromised him. And she was actually an agent of what I believe and what many believe is the greatest political security threat, which is China. And we’re just continuing to see the Democrats continue to project. They’re calling Russia the greatest threat to this country and it’s just not the case.

“And this was a serious, damning case leveled against Eric Swalwell — he should have been removed from the Intel Committee — that he was and is compromised by a very hostile power.” Video Below