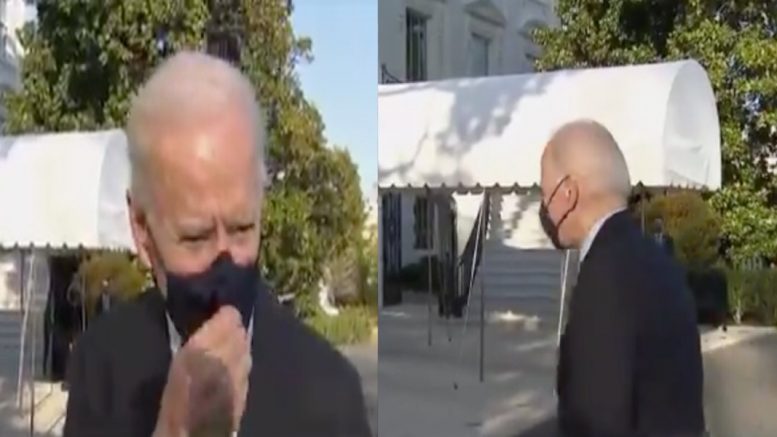 78-year-old Joe Biden was confronted by reporters at the White House over whether or not he would visit the southern border amid his administrations’ mismanaging of protecting American citizens regarding the surge of unaccompanied children and illegal aliens, which is causing a crisis at the U.S.- Mexico border.

“Are you thinking of going to the border?” a reporter asked Biden after he returned to the White House Sunday afternoon from Camp David.

“At some point I will, yes,” Joe Biden claimed, although he gave no specific timetable.

“Do you want to see first hand what’s going on in those facilities?” the reporter then asked Biden.

“I know what’s going on in those facilities” Biden asserted without proving any details and further leaving many to wonder why his administration is prohibiting the reporters from documenting conditions at the U.S. southern border.

Biden was further asked about the administration’s message to illegal immigrants to “stay home, don’t come now” and also pressed over why he thinks the message has not resonated yet, and what more can be done?

“A lot more. We’re in the process of doing it now, including making sure that we reestablish what existed before, which was they can stay in place and make their case from their home country,” Biden said, appearing to acknowledge the success of the Trump administration’s immigration policies without saying it out loud. Then he darted off to the White House without taking anymore questions from reporters.

Former President Donald Trump issued a statement on Sunday blasting Biden’s policy shift and urging him to complete Trump’s signature border wall, while at the same time, recommending that Homeland Security Secretary Alejandro Mayorkas’ “gag order on our nation’s heroic border agents and ICE officers should be the subject of an immediate congressional investigation”. Video Below

President Biden says he plans to visit the border “at some point.”

REPORTER: “Do you want to see first hand what’s going on in those facilities?”

BIDEN: “I know what’s going on in those facilities.”@ABC

(Related: Trump: “The Biden Administration Has Turned A National Triumph Into A National Disaster”)