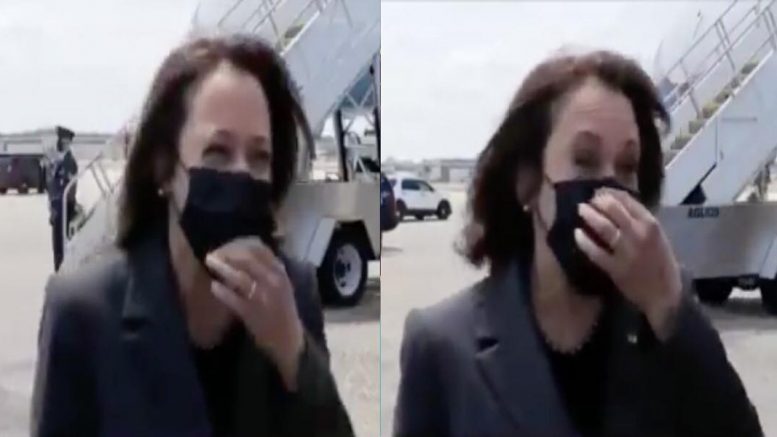 Kamala Harris was confronted by a reporter on Monday over whether or not she would visit the southern border amid the Biden administrations’ mismanaging of protecting American citizens regarding the surge of unaccompanied children and illegal aliens, which is causing a crisis at the U.S.- Mexico border.

“Do you have plans to visit the border?” the reporter asked, prompting Harris to say, “Not today”, then proceeded to cackle. “But I have before, and I’m sure I will again, yeah,” she added.

“Do you have plans to visit the border?”

House Judiciary GOP on Twitter reacted by writing, “The #BidenBorderCrisis isn’t a laughing matter. But to @KamalaHarris, it is.”

The #BidenBorderCrisis isn’t a laughing matter.

On Monday, photos from inside a U.S. Customs and Border Protection temporary overflow facility in Donna, Texas were revealed:

These photos were taken within the last few days. There are eight pods with eight cells each in the facility. At any given moment there are an average of 3,000 people in custody here. The illegal immigrants are separated by age or physical size depending on room. pic.twitter.com/kFmZgTG2Iv

Kamala Harris is seen in the video claiming, “When we have children being housed in cages crying for their mommies and daddies, we know we are better than this”.

They don’t want you to see this.

RT so everyone does! pic.twitter.com/FmzVzKaomK

(Related: Watch: Biden Darts Off After Telling Reporters He Knows ‘What’s Going On In Those Facilities’ At The Border)