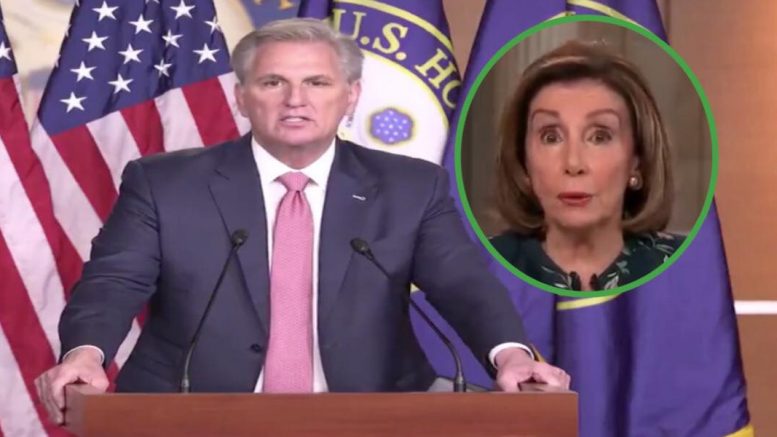 Democrat Rita Hart lost to Miller-Meeks by six votes out of more than 400,000 ballots cast — a less than 1% margin of victory — prompting Hart to petition the election results with Congress in late December. Instead of challenging the election’s results in an Iowa courtroom, Hart lodged her complaint with Congress, claiming that her campaign identified 22 voters in the 2nd District who voted legally, but whose ballots were not included in the final tally, Swamp Drain previously reported.

House Minority Leader Kevin McCarthy (R-CA), during a press conference Monday, told reporters, “There’s a contested race that the Democrats want to continue contesting, even though Mariannette Miller-Meeks won the race, won the recount– it was certified.”

“Interesting, the Democrats who are contesting it, didn’t go to the court system which was the appropriate place to go. She said I’m taking it directly to the House, because that’s where she thinks she can get the outcome that she desires,” McCarthy said.

The House minority leader said that “Speaker Pelosi talks about it” and noted that he has “watched this majority do things that no Congress in the past have done”.

“I would not put it past them to try and steal a race,” he expressed. “They did it before in 1985 with the bloody eighth in Indiana. But they should not be able to do it now. They should uphold exactly what the recount says.” Video Below

.@RepMMM won the race in #IA02. Then she won the recount. Then the state certified her election. Then she was sworn into office.

But now, Speaker Pelosi is taking steps to unseat her and steal the race for the Democrats—139 days after the election was held. pic.twitter.com/SarmTMt1ya

On Tuesday, Rep. McCarthy tweeted a video clip of Democrat Rita Hart, who he said “admits that there was only one way that we could get the result that we need, and that is to take this to the Committee on House Administration”.

“This is Nancy Pelosi’s plan. → Ignore the voters. Bypass the courts. Steal the seat,” he added.

The losing Democrat candidate in #IA02 admits that "there was only one way that we could get the result that we need, and that is to take this to the Committee on House Administration."

This is Nancy Pelosi's plan. → Ignore the voters. Bypass the courts. Steal the seat. pic.twitter.com/hYC62p8dCb

(Related: Stephanopoulos To Pelosi On Overturning GOP Victory In Iowa: “Why Investigate An Election That Was Certified By The State?”)