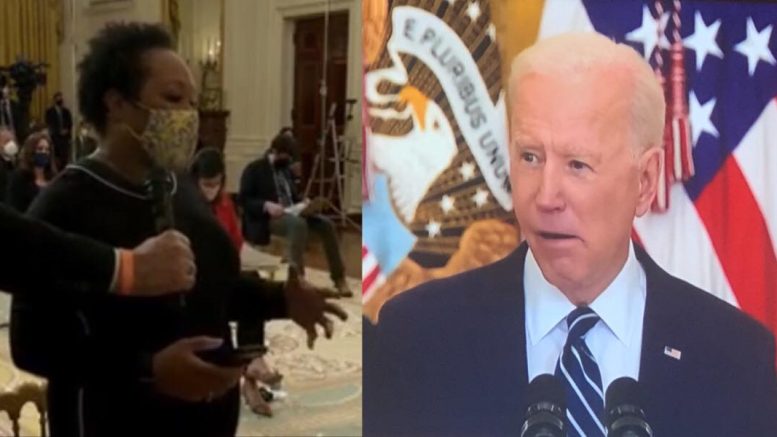 While taking questions from reporters on Thursday during his first press conference, Joe Biden appeared to lose his train of thought in the middle of his sentence, when giving an answer over filibuster reform.

While looking down at what appeared to be prepared notes, Joe Biden replied, “With regard to the filibuster, I believe we should go back to a position of filibuster that existed just when I came to the United States senate 120 years ago.”

“Um, and that is it use to be required for the filibuster. And I had a card on this, I was was gonna give you the statistics, but you probably know them,” he said, while pulling out notes. “Uh, that it used to be that uh, the– that was from between 1917 and 1971 the filibuster existed, there were a total of 58 motions to break a filibuster. That whole time.”

“Last year alone, there were five times that many. So it’s being abused in a gigantic way. And for example: it use to be you had to stand there and talk and talk and talk and talk until you collapsed. And guess what? People got tired of talking and collapsing. Filibusters broke down and were able to break the filibuster get a quorum and vote,” Biden said.

“So I strongly support moving in that direction. In addition to having an open mind about dealing with certain things that are just elemental to the functioning of our democracy like the right to vote, like the basic right to vote. We’ve amended the filibuster in the past, but here’s the deal,” he said. Continued Below

“As you observed, I’m a fairly practical guy. I want to get things done. I want to get them done consistent with what we promised the American people. In order to do that, in a 50-50 senate, we got to get to the place where I get 50 votes, so that the vice president of the United States can break the tie, or I get 51 votes without her,” Biden went on to say.

“And so, I’m gonna say something outrageous. I have never been particularly poor at calculating how to get things done in the United States senate. So the best way to get something done– if you hold something near and dear to you that you uh, um, like to be able… anyway… we’re going to get a lot done,” he said, appearing to lose his train of thought.

“And if we have to, if there’s complete lockdown and chaos as a consequence of of the filibuster, then we’ll have to go beyond what I’m talking about,” Biden added, without giving further detail. Video Below

Oh My Goodness. This is so embarrassing. I swear this is unedited. pic.twitter.com/Sad3mBOkXc

Biden was also grilled by other leftwing reporters over the filibuster:

FLASHBACK: Joe Biden on the filibuster in 2005: "I pray God" Democrats never use the nuclear option. https://t.co/TRAdJJCSDC pic.twitter.com/OoLUeIQWzK