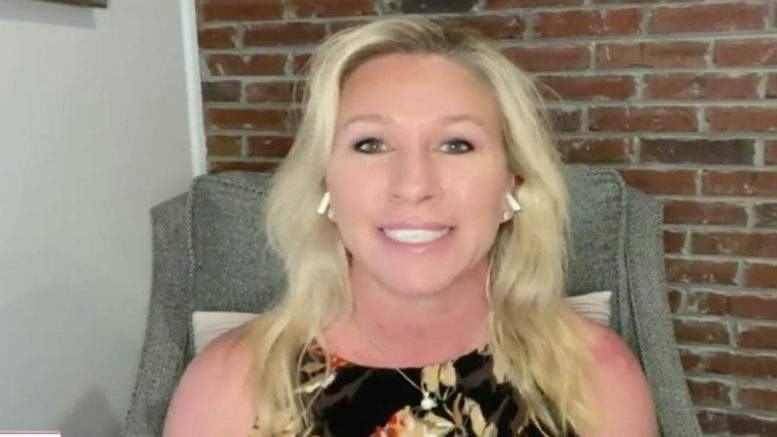 In a press release, Rep. Green said the “Protect America First Act” would “end Joe Biden’s crisis at the Southern border by halting all immigration for four years, funding and building the wall, expediting the deportation of illegal aliens, rescinding DACA and DAPA, and other measures protecting our national sovereignty.”

Rep. Green, during an interview Saturday on Newsmax, said, “I’m very proud of this legislation that I’ve introduced and am very happy to be getting great conservative cosponsors on it.”

“They have created human trafficking, sex trafficking, drug trafficking at unreal levels, historic levels. Next month, we are going to be seeing over 200K people illegally entering our country every single day– over 13K unaccompanied minors. And that is just a horrible thing to do to these kids and people,” the Georgia congresswoman expressed.

“Joe Biden giving the call and the welcome to the entire world– he’s the one that created this tragedy, and it has to be stopped,” Rep. Green urged. Continued Below

The Georgia congresswoman also announced that she is now the chairwoman of the “Committee of the Whole” after being stripped of her congressional committee duties, but believes that she will be put back on to committees if Republicans take back the House next year. “Absolutely, I’ll be put back on the committees,” she said.

“Let me tell you how relevant I really am since I lost my committees: Republicans aren’t getting anything done on committees right now anyways. If they were, we wouldn’t be seeing the Equality Act, the 1.9 trillion dollar blue state Biden bail out, the defund the police bill and so many other awful things going,” Rep. Greene explained.

“What I’ve done is I’ve put my action into the rules and procedures on the floor. That is called the Committee of the Whole and I’m now the chairwoman. I sit in there and I call for roll call votes on bills that come across. And what America doesn’t know is that most bills get voted in with a voice vote, with a handful of members of Congress, simply saying yay and nay,” she detailed. Continued Below

“As a business owner, I believe in accountability, and I believe members in Congress and myself, should vote on every single bill. And that’s why I’ve been in there calling for roll call votes, so that everyone, Republican and Democrat, can see where their Representative stands on every issue, and it’s been very effective,” Rep. Greene said.

“Last week they they had on the docket 28 suspension bills to come through. Well simply because myself, along with a couple of my colleagues, have said that we refuse to allow this to happen. I’m committing my time to calling for roll call votes, putting Congress on record,” she continued.

“That 28 went down to 5. Anytime you can stop Congress from passing legislation, which is a bunch of spending, and right now, it’s a bunch of woke, progressive, Communist policy, then I think I’m doing a very good job for the entire country,” the Georgia lawmaker expressed. Video Below

Marjorie Taylor Greene reacts to the crisis at the border and the loss of her committee assignments. @mtgreenee @CarlHigbie https://t.co/VlT7z8drtO pic.twitter.com/6XCoZhYEQg