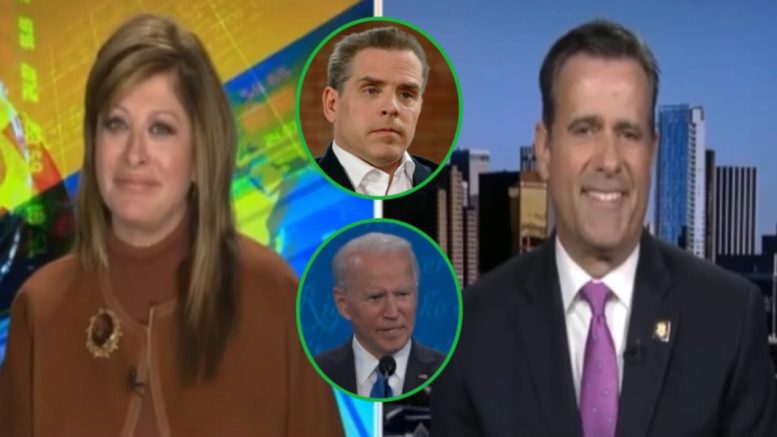 Ratcliffe’s remarks came after Hunter Biden appeared on “Jimmy Kimmel Live!” to promote his memoir, “Beautiful Things,” but also answered questions about controversies that became the center of a New York Post exposé about his dealings with Burisma, a Ukrainian energy company, and his father’s alleged involvement.

“Now look, I really don’t know and the fact of the matter is, it’s a red herring. It is absolutely a red herring. But I am absolutely, I think, within my rights to question anything that comes from the desk of Rudy Giuliani. And so, ‘I don’t know’ is the answer,” Hunter Biden told Jimmy Kimmel of his laptop.

The New York Post, last October, revealed that Hunter introduced his father to a top executive at Burisma, which had been investigated for corruption. The revelations were contained in a series of emails found on a laptop dropped off at a Wilmington, Delaware, computer repair shop in April 2019 but never picked up, the Post reported.

Hunter has admitted during a CBS interview that there “certainly” could be a laptop out there — but he couldn’t recall if he dropped off the one at the shop.

“It’s not about being right, it’s about being truthful,” former Director of National Intelligence John Ratcliffe told Maria Bartiromo. “That’s why I came out at that time, after Adam Schiff came out with a false political narrative about this being Russian disinformation when there was absolutely no intelligence to support that. And it shouldn’t surprise us, that’s what Adam Schiff does as a politician.”

“To have 50 former Obama, Clinton, Biden national security officials come out after the director of national intelligence says that this is not true and promote a false narrative to protect Joe Biden and try to influence the outcome of the election, you know, that is the definition of politicizing intelligence,” Ratcliffe said of the officials.

“And people ask me all the time about  election interference and election influence, and yeah, we need to be concerned about Russia and China and Iran, but there’s not greater expression of that than what you saw there: a completely false narrative. The intelligence community knew that this was not Russian disinformation and law enforcement knew that it was Hunter Biden’s laptop,” he explained. Video Below

“There was an open investigation into that, and yet, those officials supported by a corporate media ran a false narrative and misinformed the American people,” he said.

The problem, Maria, is that with the exception of folks like you, very few people out in the media have accurately reported Hunter Biden, Joe Biden and those issues that were important– that would have framed the outcome of the election,” Mr. Ratcliffe added.

(Related: DNI Ratcliffe Shoots Down Schiff’s Theory That Hunter’s Laptop Is Part Of ‘Russian Disinformation’: “There’s No Intelligence That Supports That”)