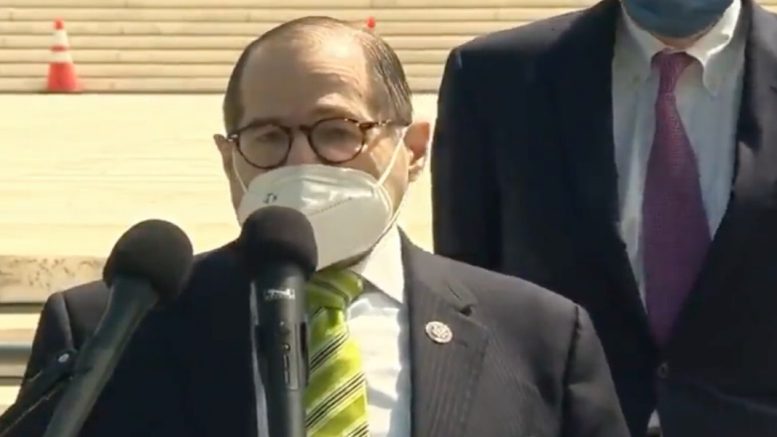 Rep. Jerry Nadler claimed during a news conference Thursday that expanding the Supreme Court “is a much needed next step” as the “country and judicial system evolved” over time.

“Nine justices may have made sense in the 19th century when there were only 9 circuits. … But the logic behind only having 9 justices, is much weaker today when there are 13 circuit courts,” Rep. Nadler said, appearing to try to sell the idea to listeners.

“Our predecessors made imminent sense when they pegged the size of the Supreme Court with the number of judicial circuits. As our country as grown, so to the Supreme Court. 13 justices for 13 circuits is a logical progression. And that is another reason why I am glad to join my colleagues in introducing the Judiciary Act of 2021 to establish the Supreme Court’s size as 13,” Nadler said.

Nadler alleged that adding 4 more justices to the bench “will enable us to do justice and to rectify the great injustice that was done in packing the court”, adding, “Some people will say, ‘We’re packing the court’, we’re not packing it, we’re unpacking it. Senator McConnell and Republicans packed the court over the last couple of years. … This is a reaction to that. It’s a necessary step in the evolution of the court, and I’m proud to co-sponsor it.” Video Below

“When I got in, we had over 100 federal judges that weren’t appointed,” President Trump said during a speech in Ohio. “I don’t know why Obama left that. It was like a big, beautiful present to all of us. Why the hell did he leave that?” adding, “Maybe he got complacent”.

“It was like the gift from heaven. We were left judges,” the 45th President said. “They are the ones that judge all your disputes. They judge on what’s fair on the environment and what’s not fair. Where they’re going to take your farms and factories away and where they’re not.”

Meanwhile on Thursday, House Speaker Nancy Pelosi (D-CA) claimed that she does not plan on supporting the Democrats’ court packing bill, but she supports Biden’s commission “to study” over whether to expand the nation’s highest court. Video Below

House Speaker Pelosi says she will not bring Democrats' 'expand the court' bill to the House floor for a vote: https://t.co/VlT7z8v2lm pic.twitter.com/x7istbTwaH

Last year, however, Pelosi appeared open to the idea of the packing the Supreme Court:

(Related: Schumer Warns “You Will Pay The Price” To SCOTUS Gorsuch & Kavanaugh During An Abortion Rights Rally)