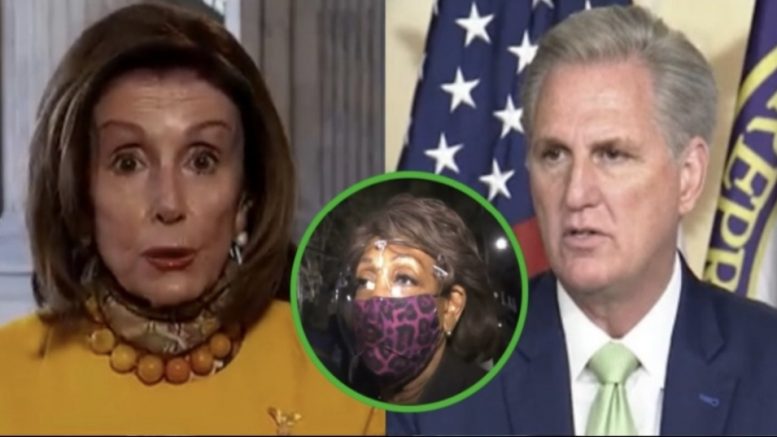 Rep. Waters was heard on camera urging protesters in Minnesota “to stay on the street,” “fight for justice” and “get more confrontational” if former police officer Derek Chauvin is acquitted in his trial.

Related Article: Rep. MTG To Pelosi: I Can Expect A Yes Vote From You On My Resolution To Expel Rep. Waters, Right?

Just hours after Rep. Waters made the suggestions to protesters, the Minnesota National Guard and Minneapolis Police Department neighborhood security team was fired upon early Sunday morning in a drive-by shooting. Luckily, there were no fatalities, and only minor injuries were reported.

In response, Kevin McCarthy on Sunday announced that he will “bring action this week” if Speaker Pelosi fails to act against Rep. Waters “dangerous rhetoric.”

“Maxine Waters is inciting violence in Minneapolis — just as she has incited it in the past,” McCarthy tweeted. “If Speaker Pelosi doesn’t act against this dangerous rhetoric, I will bring action this week.” See Below

Maxine Waters is inciting violence in Minneapolis — just as she has incited it in the past. If Speaker Pelosi doesn’t act against this dangerous rhetoric, I will bring action this week.

The statement by McCarthy came in wake of fellow colleague Rep. Marjorie Taylor Greene publicly asking Pelosi if she could count on her for a “yes vote” to a planned resolution to expel Rep. Waters from Congress — especially after the House Speaker blamed President Trump’s rhetoric for the January 6th riot at the Capitol Building and voted to impeach him over it.