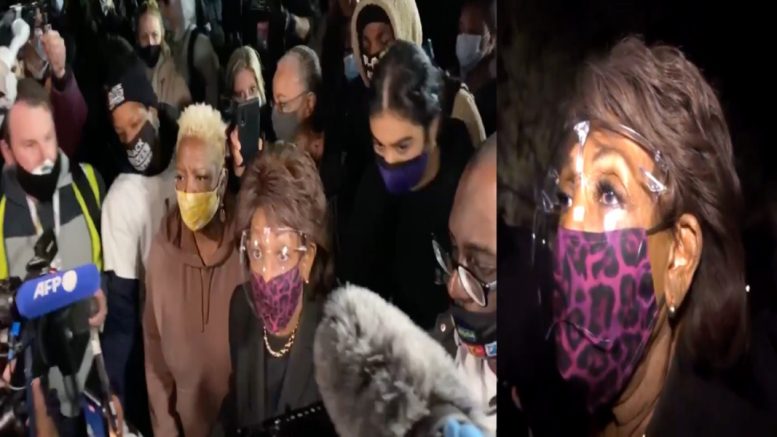 Rep. Maxine Waters (D-CA) crossed state lines to march with protesters in Brooklyn Center, Minnesota on Saturday evening, urging demonstrators to “stay on the street” and “fight for justice” if Derek Chauvin is acquitted in his trial.

“I’m going to fight with all of the people who stand for justice,” the 82-year-old congresswoman told reporters shortly before an 11 p.m. curfew. “We’ve got to get justice in this country and we cannot allow these killings to continue.”

“But I am very hopeful and I hope that we’re going to get a verdict that say, ‘guilty, guilty, guilty’, and if we don’t, we cannot go away,” she insisted, optimistic that Chauvin would be convicted of murder.

The California Democrat lawmaker reportedly said she plans to stay in Minnesota until Monday when closing arguments are expected in the Chauvin trial, according to New York Times reporter Nicholas Bogel-Burroughs. Video Below

Maxine Waters is marching in Brooklyn Center tonight and told people to take to the streets if Chauvin is acquitted pic.twitter.com/RemfvCCLAn

Surprise: @RepMaxineWaters suddenly appeared at the protest in Brooklyn Center, Minnesota, tonight. Says she’ll be in town til Monday.

“We cannot allow these killings to continue.” pic.twitter.com/OrgkKG96cn

Democrat Rep. Maxine Waters says she doesn't recognize the curfew and encourages people to break it and says she hopes the protests will continue. pic.twitter.com/nVpzX2yH6K

.@RepMaxineWaters from California is here in front of Brooklyn Center Police Department. Swarmed with cameras pic.twitter.com/jbVi437keH

Others appearing in Brooklyn Center on Saturday included the Rev. Jesse Jackson. The crowd was demonstrating for the seventh straight night against the fatal police shooting of Daunte Wright, 20, during a traffic stop last Sunday, Fox News reported.

Jesse Jackson is here at Brooklyn Center Police Department embracing people in the community. He’s a magnetic presence, the crowd around him is growing as he walks @WCCO pic.twitter.com/HP0W2qLeB8

The clashes have included demonstrators throwing objects at police. Police arrested more than 100 people Friday but it was unclear if any arrests were made Saturday.

The officer who allegedly killed Wright, identified as Kim Potter, resigned last week, as did the Brooklyn Center police chief. Potter claimed she accidentally grabbed her gun instead of a stun gun and shot Wright with the firearm. She faces manslaughter charges.

Waters reportedly left the protest shortly before the curfew took effect. A small crowd remained defiant after the curfew began.

(Related: Waters On Floyd’s Death: “The Way The President Conducts Himself, In A Way He’s Dog Whistling”