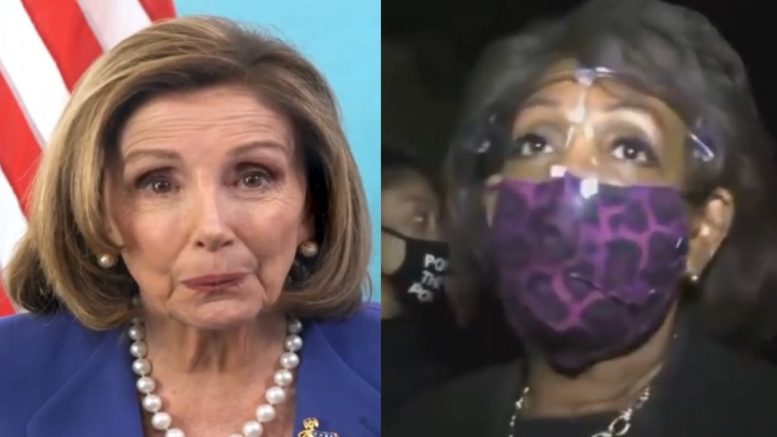 House Speaker Nancy Pelosi (D-CA) on Monday, reportedly said that said Rep. Maxine Waters (D-CA) should not apologize for over controversial remarks she made when she crossed state lines to march with protesters in Brooklyn Center, Minnesota on Saturday evening, urging demonstrators to “stay on the street”, “fight for justice” and “get more confrontational” if former police officer Derek Chauvin is acquitted in his trial.

When asked by a reporter if Rep. Maxine Waters needs to apologize for suggesting that activists need to “get more confrontational”, Speaker Nancy Pelosi reportedly said, “No, she doesn’t.”

“That woman on the floor should be apologizing for what she said,” Pelosi said, referencing comments by Rep. Lisa McClain (R-MI), who spoke shortly after Pelosi gaveled the House into session for the day.

“Maxine talked about confrontation in the manner of the civil rights movement,” Pelosi claimed. “I myself think we should take our lead from the George Floyd family. They’ve handled this with great dignity and no ambiguity or lack of– misinterpretation by the other side. No, I don’t think she should apologize.”

Asked if the Waters comments could incite violence, Pelosi said, “No, absolutely not.” Continued Below

“Once again, this weekend, we saw a member of the majority openly call for more confrontation in a Minneapolis suburb,” Rep. McClain said. “That very night, there was a drive-by shooting in that community where police and the National Guardsmen were targeted. If this were reversed, if this was said by a Republican, you know Madam Speaker, that the majority in this chamber would move to strip that representative of their committees and possibly to expel them from Congress.”

In response to Pelosi’s snub toward her, McClain later tweeted, “As ‘that woman,’ no I won’t apologize for calling out the double standards that you have set @SpeakerPelosi.” Video Below

.@RepMaxineWaters is openly calling for violence in Minnesota. If she were a Republican, the Democrats would have already removed her from her committees and tried to expel her.

If it weren't for double standards, we would have no standards at all. #PelosiDoubleStandards pic.twitter.com/5N7tcHkL3P

House Minority Leader Kevin McCarthy (R-CA) earlier on Monday accused Waters of “inciting violence” with her comments and called on Pelosi to disavow them.

McCarthy, on Sunday, also announced that he will “bring action this week” if Speaker Pelosi fails to act against Rep. Waters “dangerous rhetoric.”

“Maxine Waters is inciting violence in Minneapolis — just as she has incited it in the past,” McCarthy tweeted. “If Speaker Pelosi doesn’t act against this dangerous rhetoric, I will bring action this week. Continued Below

From the pool. Pelosi says she doesn’t think Waters should apologize for her remarks about confrontation after the Chauvin verdict. Pelosi also said she didn't think Waters comments would incite violence.

“No, no, I don’t think she should apologize.”