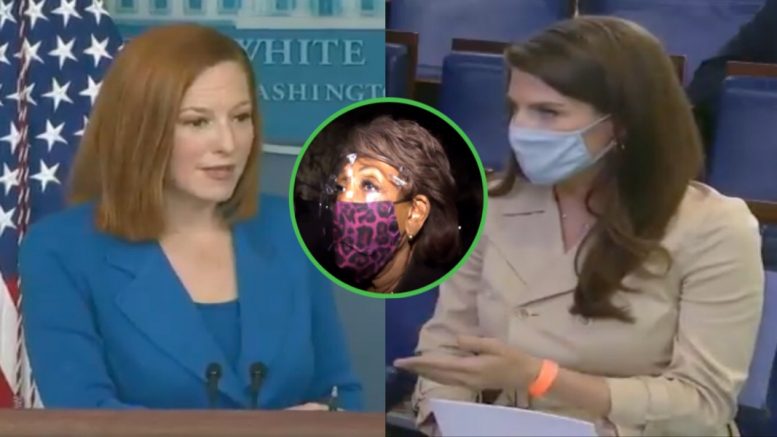 White House Press Secretary Jen Psaki on Monday dodged a question over whether or not the Biden administration condemned controversial remarks made by Rep. Maxine Waters (D-CA) over the weekend, in which the California Democrat congresswoman said, while appearing alongside protesters in Minnesota, that the activists needed to get “more confrontational”, if former police officer Derek Chauvin was not convicted of murdering George Floyd.

Chief White House Correspondent for CNN Kaitlin Collins pressed Jen Psaki about Rep. Waters’ comment over the weekend and whether Joe Biden agreed that people need to get “more confrontational.”

“Well I can speak to the president’s view, um, he has been very clear that he recognizes the issue of police violence against people of color, communities of color, is one of great anguish and it’s uh, exhausting and quite emotional at times,” Psaki said.

“As you know, he met with the Floyd family last year and has been closely following the trials we’ve been talking about, and is committed to undoing this long standing systemic problem,” Psaki asserted. Continued Below

(Related: McCarthy Warns Pelosi: If You Don’t Act Against Rep. Waters’ “Dangerous Rhetoric,” I Will Bring Action This Week)

“His view is also that exercising First Amendment rights and protesting injustice is the most American thing that anyone can do,” said the White House press secretary.

As previously reported by Swamp Drain:

On Sunday evening, Rep. Marjorie Taylor Greene (R-GA) accused Rep. Maxine Waters of breaking the law when she traveled to Minnesota and urged protesters to “to stay on the street,” “fight for justice” and “get more confrontational” if former police officer Derek Chauvin is acquitted in his trial.

Rep. Greene — who is planning on introducing a resolution to expel Rep. Waters from Congress — cited 18 U.S. Code 2101, which specifically addresses criminal activity pertaining to riots.

(Related: Rep. MTG To Pelosi: I Can Expect A Yes Vote From You On My Resolution To Expel Rep. Waters, Right?)