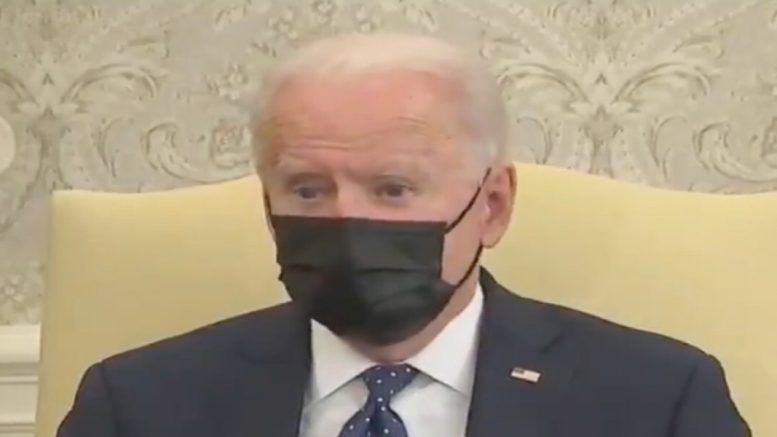 Joe Biden told reporters in the Oval Office on Tuesday that he is “praying” the jury in Derek Chauvin’s trial will issue the “right verdict” and “the evidence is overwhelming” in his view.

“I’m praying the verdict is the right verdict,” Biden said. “I think it’s overwhelming, in my view. I wouldn’t say that unless the jury was sequestered.”

Biden also said he spoke with the family of George Floyd, adding that he “can only imagine the pressure and the anxiety that they’re feeling.”

Pres. Biden on the Chauvin trial:

"I'm praying the verdict is the right verdict. The evidence is overwhelming in my view." pic.twitter.com/NNqozvOrN6

Meanwhile, White House press secretary Jen Psaki told a reporter Tuesday, “We’re not going to get ahead of the outcome,” when asked about Biden saying that the evidence in the Chauvin trial is “overwhelming” in his view.

"We're not going to get ahead of the outcome," says @PressSec when asked about President Biden saying that the evidence in the Chauvin trial is "overwhelming" pic.twitter.com/eInIrGAiGb

President Biden spoke with the family of George Floyd yesterday to check in with them and also share that the family was in his prayers.

The judge presiding over Chauvin’s trial said Monday that Rep. Waters’ comments could result in the entire trial being overturned.

REPORTER: "Is it a double standards to not condemn or speak out against the comments of Maxine Waters?"@PressSec: "The Congresswoman has provided further clarification of her own remarks…" pic.twitter.com/PO4zlvTrBD