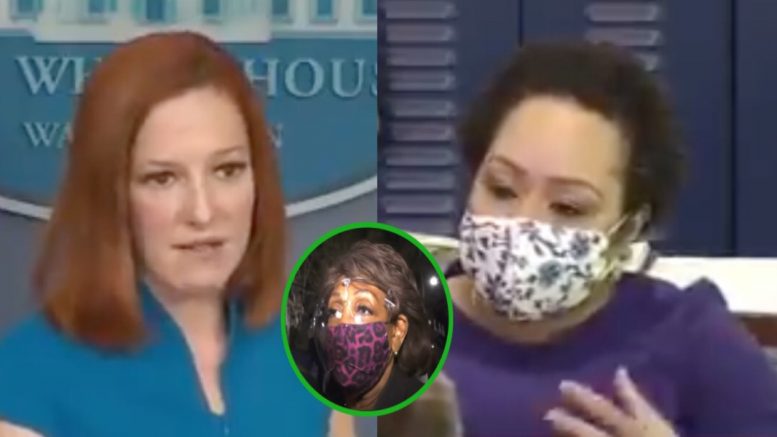 PBS Newshour White House correspondent Yamiche Alcindor wondered Tuesday why “the White House isn’t also coming to the defense” of Rep. Maxine Waters (D-CA) after the California Democratic congresswoman stood with protesters in Brooklyn Center, Minnesota on Saturday evening, urging demonstrators to “stay on the street”, “fight for justice” and “get more confrontational” if former police officer Derek Chauvin is acquitted in his trial.

“I wonder why the White House isn’t coming to the defense of Representative Waters, given the fact that she is facing an onslaught of attacks, especially, I would say from Republicans,” Yamiche Alcindor asked White House press secretary Jen Psaki on Tuesday during a briefing.

“I wonder why the White House isn’t saying, ‘I back what she said about being confrontational’. She was obviously not threatening violence. There are civil rights leaders saying, ‘That’s what civil rights is, to be confrontational, to be active'”, the taxpayer-funded reporter also claimed.

Jen Psaki responded, “Well, she also clarified her own remarks, Yamiche, and I think that’s the most powerful piece to point to.”

Rep. Waters told The Grio on Monday during an interview, that Republicans were trying to “send a message” to white supremacists with their criticism of her, adding, “I am nonviolent”. Continued Below

“Republicans will jump on any word, any line and try to make it fit their message and their cause for denouncing us and denying us, basically calling us violent … any time they see an opportunity to seize on a word, so they do it and they send a message to all of the white supremacists, the KKK, the Oath Keepers, the [Proud] Boys and all of that, how this is a time for [Republicans] to raise money on [Democrats’] backs,” Rep. Waters claimed.

Waters also told The Grio she is “not worried that they’re going to continue to distort what I say,” adding, “This is who they are and this is how they act. And I’m not going to be bullied by them.”

“This is a time for [Republicans] to keep telling our constituents that [Democrats] are the enemy and they do that time and time again,” Waters said. “But that does not deter me from speaking truth to power. I am not intimidated. I am not afraid, and I do what needs to be done.” Video Below

PBS' Yamiche Alcindor asks Psaki why "the White House isn't also coming to the defense of Rep. Waters given the fact that she is facing an onslaught of attacks… She was obviously not threatening violence." pic.twitter.com/AqC4L3tTqE

On Monday, Alcindo also appeared to fact-check defense attorney Eric Nelson by claiming that Rep. Waters’ “did not threaten violence” when the Democratic congresswoman told activists to “get more confrontational”.

Her tweet came after the judge overseeing the trial for former police officer Derek Chauvin expressed concerns in regards to remarks made by Rep. Maxine Waters at an anti-police march over the weekend.

As previously reported by Swamp Drain:

Chauvin’s defense attorney complained to Judge Peter Cahill that the jury has not been sequestered, and he cited Rep. Waters’ remarks along with all of the media attention that’s been given to the case.

In response, the Judge Cahill said, “I’ll give you that Congresswoman Waters may have given you something on appeal that may result in this whole trial being overturned…” Continued Below

Eric Nelson is now using Rep Maxine Waters saying that protesters should get “more active” & “more confrontational” if Derek Chauvin isn’t convicted as a reason for a mistrial to be declared. He’s claiming she threatened violence.

The judge has just denied the defense’s motion to declare a mistrial. He said he would hope elected officials would stop talking about the Derek Chauvin trial. But he adds one congresswoman’s opinion won’t make the difference.

Fact Check: She actually did.