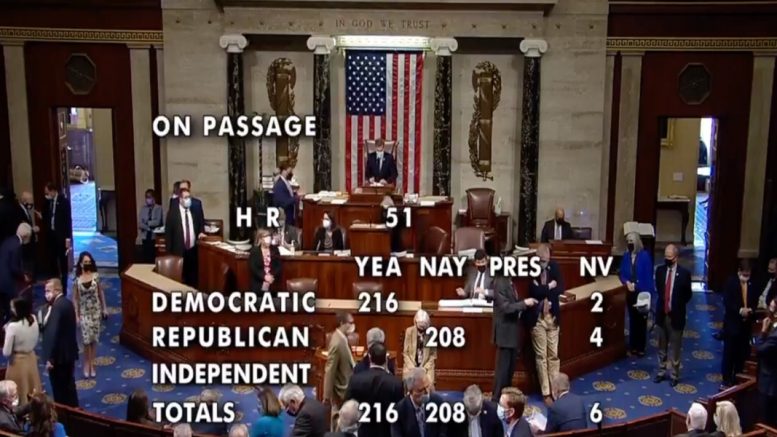 The Democrat-controlled House of Representatives passed legislation to make Washington, D.C. the 51st state by a strictly party-line vote in Congress on Thursday.

The vote was 216 to 208, with all Republicans rejecting the statehood bill; H.R. 51, sponsored by Congresswoman Eleanor Holmes Norton (D-DC).

“Statehood for the District of Columbia is about showing respect for our democracy,” Pelosi said prior to the vote. “It’s well past the time to grant them the rights that they have been fighting for and that they deserve,” she added.

D.C. statehood already passed the House last June but it died in the GOP-led Senate. The chances of becoming law are better now with supportive Democrats in charge of both the Senate and White House, but the Senate remains the biggest challenge with the legislative filibuster still in place that requires 60 votes to advance legislation, Fox News reported.

However, many Democrats in the House, including Majority Leader Steny Hoyer (D-MD) are demanding the Senate get rid of the filibuster so the statehood legislation could pass with a simple majority vote. Continued Below

Republicans argued that because Washington, D.C.’s establishment is constitutionally based, any change to the district must come in the form of a constitutional amendment — not legislation from Congress. And the GOP panned statehood as a power grab by Democrats to expand the majority in the Senate by adding two more senators from a liberal enclave, as reported by Fox News.

“Let’s be clear what H.R. 51 is all about: It’s about Democrats adding two new progressive U.S. senators to push a radical agenda championed by the Squad to reshape America into the socialist utopia they always talk about,” argued Rep. James Comer (R-KY) on the House floor Thursday.

Meanwhile, the debate over statehood became heated on the House floor Thursday when Rep. Mondaire Jones (D-NY) accused some Republicans of being against D.C. statehood because the district was not white enough in their minds to qualify for self-rule. Continued Below

“I have had enough of my colleagues’ racist insinuations that somehow that people of Washington D.C. are incapable or even unworthy of our democracy,” Rep. Jones said in a floor speech that drew a quick rebuke from Republicans. “One Senate Republican said that D.C. wouldn’t be a ‘well rounded, working-class state.’ I had no idea there were so many syllables in the word white.”

Jones continued: “One of my House Republican colleagues said that D.C. shouldn’t be a state because the district doesn’t have a landfill. My goodness, with all the racist trash my colleagues have brought to this debate, I can see why they’re worried about having a place to put it.”

Republicans immediately asked for Jones’ words to be struck down, and the freshman Democrat agreed to withdraw his statements. Video Below

.@RepMondaire: "One of my House Republican colleagues said that DC shouldn't be a state because the District doesn't have a landfill. My goodness, with all the racist trash my colleagues have brought to this debate I can see why they're worried about having a place to put it." pic.twitter.com/EnbQLBfPgN

Under the plan, the 51st state would be called “Washington, Douglass Commonwealth,” named for Frederick Douglass. The state would consist of 66 of the 68 square miles of the present-day federal district.

The two square miles around the White House, Capitol, Supreme Court and National Mall would be carved out into a reduced federal district controlled by Congress and named the “Capital”,