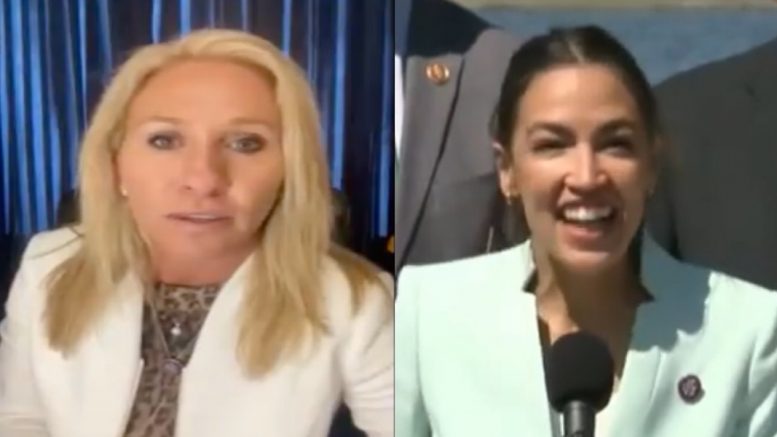 In a series of tweets, Rep. Greene insisted it “would be informative for the American People”, noting that Americans “deserve to hear the two sides with pro’s and cons”.

On Wednesday, Rep. Greene posted a photo of herself talking to the New York congresswoman on the House floor, saying she was “glad” that she ran into her colleague, Rep. Ocasio-Cortez, “to plan our debate about the Green New Deal”.

“After I finish reading all 14 pages, like we agreed, I’ll schedule time for our debate,” the Georgia Republican added in the caption alongside the hashtag “#MTGvsAOC.”

Rep. Greene returned to work Thursday ready to face off with her Democratic colleague, writing on Twitter, “I read your 14 page Communists manifesto,” before saying she was “looking forward to debating.”

In a video that surfaced on Twitter, Rep. Greene described her conversation with AOC, saying, “She had asked me if I read her 14-page Green New Deal. I said, ‘I’ve read some of it’, and she said, ‘Well, when you read all of it, then you can challenge me to a debate.'” Continued Below

“The good news is, I’ve read all 14 little pages, and I’m very ready to debate her on the House floor. So this is what we’re going to be doing– the date hasn’t been set, but when it is set, I will let you know,” the Georgia congresswoman said.

“And she better show up. If she chickens out, then she chose exactly who she really is: a scared little girl that is pretty stupid and doesn’t know anything about the economy or economics. And she boasts that she does, because she has a ‘degree’ in economics,” she expressed.

“But she doesn’t have enough common sense to actually be able to produce anything in the real world. She just has a government job,” Rep. Greene added. Video Below

I’m glad I ran into you today @AOC to plan our debate about the Green New Deal.

After I finish reading all 14 pages, like we agreed, I’ll schedule time for our debate.#MTGvsAOC pic.twitter.com/viuH5Uj0oD

Looking forward to debating you. #MTGvsAOC

Rep. Marjorie Taylor Greene, who has challenged AOC to a 'Green New Deal' debate, says the Congresswoman is "a scared little girl that is pretty stupid." pic.twitter.com/zupdQh2AyJ

(Related: AOC Claims There ‘Is Not a Surge’ At The Border, Rep. Greene Levels Her: “AOC Is Lying & Being A Racist Blaming ‘White Supremacist’”)