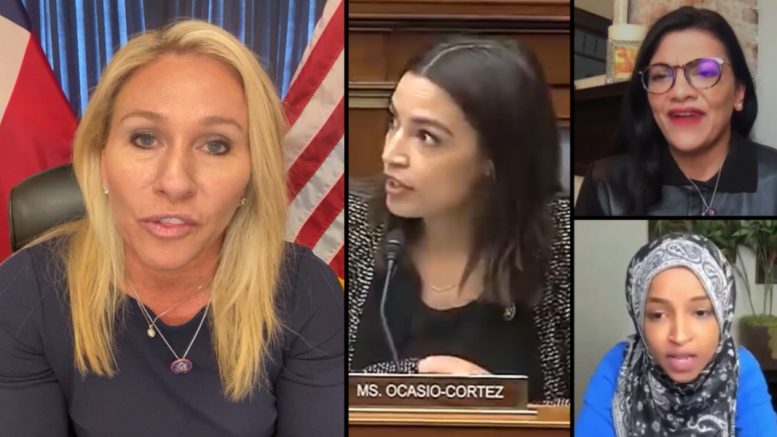 Rep. Marjorie Taylor Greene (R-GA) labeled “squad” members Reps. Alexandria Ocasio-Cortez (D-NY), Ilhan Omar (D-MN), and Rashida Tlaib (D-MI) as the “Jihad squad” for their alleged support of Hamas. Hamas is a militant and political organization currently in power in the Gaza Strip. According to Mahmoud Abbas, President of the Palestinian National Authority, “Hamas is funded by Iran.”

“Let’s talk about the Jihad squad, shall we? These are the lovely ladies that claim to care about all the people– groups that– except you know who. But here’s the deal: the Jihad squad, they support terrorists. This is Ilhan Omar, this is Rashida Tlaib, this is Alexandria Ocasio-Cortez,” Rep. Greene said during a Facebook live video Wednesday.

“If you want to argue with me about their support of terrorism, go right now to their Twitter pages or their Facebook pages, where they have for days now, been supporting terrorist Hamas over in Israel. They have been supporting them lobbying rockets– rocket after rocket fire into Israel, firing onto innocent civilians after these Palestinians started the fight at the temple mount just a few days ago,” Rep. Greene explained.

“Another issue with the Jihad squad– they support the same terrorists, same type of terrorists, here at home in the United States: Antifa and BLM– burning cities over the past year, attacking police officers, attacking innocent people, American citizens, attacking federal buildings, taking over police precincts, tearing down monuments, tearing apart our history. And then you have the Jihad squad cheering them on day after day, night after night, and even encouraging people to donate to get these criminals, these criminal domestic terrorists, bailed out of jail,” she said.

“I say the Jihad squad has to go. This does not represent America and what we stand for, not one single bit. We are not a nation that supports terrorism, nor should we ever have members of Congress representing the American people supporting terrorism abroad and especially at home,” Rep. Greene insisted during her Facebook live video. Continued Below

On Tuesday, Rep. Greene also tweeted, “Not only does the #JihadSquad support terrorism at home and abroad, they also hate our great law enforcement. America should not have members of Congress like this.”

She further posted a video of Palestinian militants launching rockets into civilian areas, reportedly targeting Tel Aviv on Tuesday, adding, “This is what @IlhanMN @RashidaTlaib and @AOC are for.”

“The #JihadSquad support terrorists. Members of Congress should be expelled for supporting terrorists like Hamas and Antifa/BLM. Stop using our tax dollars to bomb our ally Israel!” Rep. Greene demanded. Continued Below

Rep. Marjorie Taylor Greene’s Facebook live video; her remarks over the “Jihad squad” begin at 5:55 into the video:

Not only does the #JihadSquad support terrorism at home and abroad, they also hate our great law enforcement.

America should not have members of Congress like this.

This is what @IlhanMN @RashidaTlaib and @AOC are for.

Members of Congress should be expelled for supporting terrorists like Hamas and Antifa/BLM.

We stand in solidarity with the Palestinian residents of Sheikh Jarrah in East Jerusalem. Israeli forces are forcing families from their homes during Ramadan and inflicting violence.

It is inhumane and the US must show leadership in safeguarding the human rights of Palestinians.

Israeli air strikes killing civilians in Gaza is an act of terrorism.

It’s unconscionable to not condemn these attacks on the week of Eid. https://t.co/vWWQfMqBkT

I see some who were silent as Palestinians were ripped from their homes and tear gassed in their holiest mosques now finding their voices – to stand with the Israeli gov as airstrikes leave Palestinian children dead. Where are your voices when Palestinians are under threat?

Related: Nancy Pelosi Vents Her Frustration Over Trump’s ‘Historic’ Peace Deals: “Good For Him For Having A Distraction”)