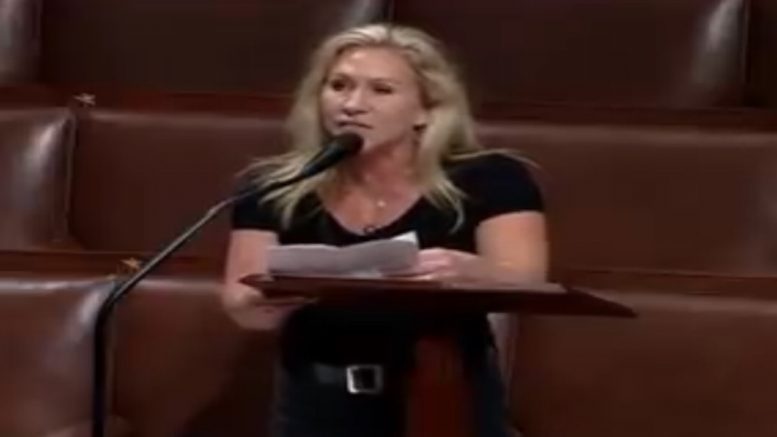 Rep. Majorie Taylor Greene (R-GA) expressed her opposition on House floor on Tuesday over the recently authorized January 6 Commission to investigate what took place at the Capitol.

The bill includes some concessions to Republicans and would comprise 10 members split evenly between both parties. It also ensures members can only issue subpoenas in a bipartisan manner — they can be issued by a majority vote or by agreement between the chair and vice chair. Democrats would choose the chair and Republicans the vice chair, per Fox News.

“I rise in opposition to the Commission to study the events of January 6, as well as spending $2 billion in security supplemental,” Rep. Green said on Tuesday.

“The question that comes to mind is this: What about all the riots that happened during the summer of 2020 after the death of George Floyd? What about all the damage caused to federal buildings, churches, people’s businesses, and innocent people that were killed, like David Dorn?” she wondered.

The Georgia congresswoman detailed the damage done to several cities across the United States last summer when buildings were “damaged, burned, or destroyed.” Continued Below

“BLM and Antifa established an autonomous zone in Seattle,” Rep. Greene said, “and attempted to burn government buildings in Portland, is that not an insurrection?”

She brought up Portland, Ore., which saw over 100 nights of rioting, where rioters attempted to “burn down government buildings,” which including damages to the courthouse as well. This was the courthouse that President Trump was derided for trying to protect with the help of federal agents, The Post Millennial reported.

Rep. Greene also told the House that “we should back the blue, because they certainly back us.” Video Below

Rep. Marjorie Taylor Greene further wanted to know who placed the pipe bombs outside the DNC and RNC headquarters on the night of January 5, why former President Trump’s request for 10,000 National Guard troops for the event he held at the ellipse on January 6 was denied, who denied it, and why?

Instead of continuing the witch hunt against President Trump and his supporters, we need to investigate BLM/Antifa domestic terrorism!

Watch my floor speech from this morning! pic.twitter.com/naaB7dvky5

The Jan 6th Commission is just another big smoke screen and witch hunt on Trump and his supporters to fuel the hate, while ignoring Antifa/BLM nonstop violence.

It will be used by the media to distract people away from the real damage Biden and Dems are doing to our country.

Specifically on the Qanon Shaman;

Did he physically assault anyone?

Did he do any damage to federal property?

Did he burn anything?

Did he loot or steal anything?

Where are the videos? https://t.co/hhYp1MAFi3

He said in a statement Tuesday:

The renewed focus by Democrats to now stand up an additional commission ignores the political violence that has struck American cities, a Republican congressional baseball practice, and, most recently, the deadly attack on Capitol Police on April 2, 2021,” McCarthy said in a statement. “The presence of this political violence in American society cannot be tolerated and it cannot be overlooked. I have communicated this to our Democrat colleagues for months and its omission is deeply concerning.

Given the political misdirections that have marred this process, given the now duplicative and potentially counterproductive nature of this effort, and given the speaker’s shortsighted scope that does not examine interrelated forms of political violence in America, I cannot support this legislation.