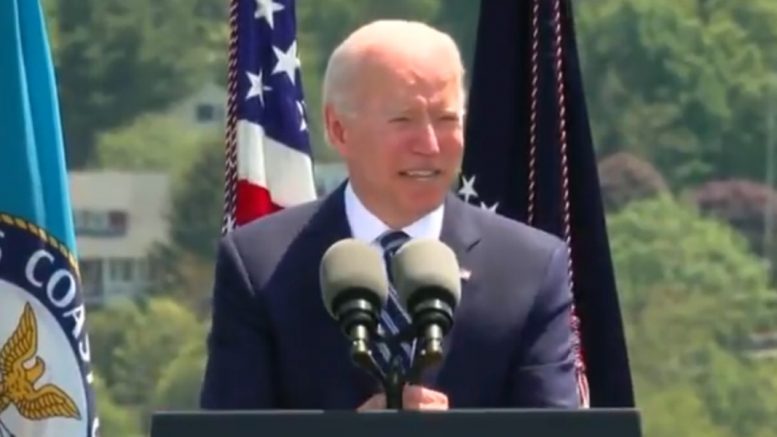 Biden told the the graduating class they were was “dull,” after they failed to react to his applause lines and jokes during his commencement speech.

“You’re a really dull class. Come on, man. Is the sun getting to you?” Joe Biden said after comparing the Coast Guard with the Navy.

“All kidding aside, being here together is a victory in and of itself,” he added.

President Biden called graduates of the Coast Guard Academy "dull" after they didn't clap during his speech.

"You are a really dull class. C’mon man. Is a sun gettin' to you?" pic.twitter.com/TstESv66zp

Biden referenced the description of the Coast Guard as “that hard nucleus around which the Navy forms in time of war,” though he fumbled with the quote.

The quote is a longstanding saying within the Coast Guard, but its origins are unclear. President Ronald Reagan referenced the quote in an address to the National Guard Academy in 1988, but he did not use it as an applause line.

Notably, former Vice President Dick Cheney made the same reference when he delivered the commencement speech to the National Guard Academy in 2008, and he did receive applause. “There’s a saying in your line of work — that the U.S. Coast Guard is the ‘hard nucleus about which the Navy forms in time of war,” Cheney said, pausing for applause according to a transcript. “I’m not sure what the Navy thinks of that.” Continued Below

In 2016, Jeb Bush asked people in the audience at a town hall to “please clap”.

(Related: Biden Appears To Forget The Name Of The Pentagon & Defense Secretary’s Name: “The Guy Who Runs That Outfit Over There”)