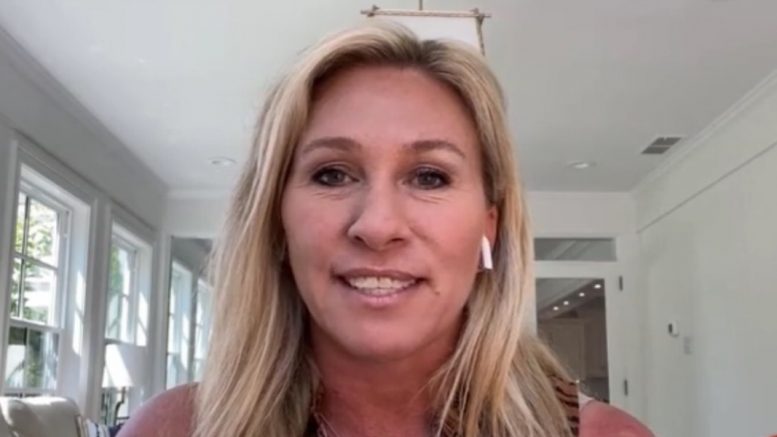 Rep. Marjorie Taylor Greene (R-GA) and Congressman Matt Gaetz (R-FL) have teamed up to carry the torch for former President Donald Trump by holding “America First” cross-country rallies, with the next event being held Thursday, May 27th at the Dalton Convention Center at 6:30 p.m.

Rep. Greene appeared on Steve Bannon’s “War Room Pandemic” Wednesday, describing the reason for the rallies. She also pushed back at the establishment in Washington, D.C., who want her and Rep. Gaetz out of Congress, and disclosed the underlying reason why she speculates they “fear” her.

Steve Bannon expressed surprise over how “big” the “America First” rallies have turned out for them, asking, “Are you kind of overwhelmed by the response you’ve gotten by the American people? [Be]cause, I’ve got to tell you, outside of Donald J. Trump, and I consider myself an expert in this, there’s not a politician in this country that can draw, not just the crowds, but the intensity of the enthusiasm that Marjorie Taylor Greene draws. And that’s why they fear her. They fear her because of her support by hard working Americans.”

Rep. Greene responded: “You know the American people are fired up about our America First rallies, and I’ll tell you exactly why, Steve. They are fed up with BS and the lies that pour out of the swamp in D.C. that just bubble out the media and the hate-America leftists and the Democrats. They’re sick and tired of it and we know the way to fight back. We know America first polices are the way forward for the future.”

“What Matt Gaetz and I are doing is we’re traveling the country. We’re taking it by storm and bringing everyone out and bringing people together and bringing hope back that we can truly save America and stop socialism,” she expressed. Continued Below

“They fear me because they know I’m with the people. I’m not a politician, and I say it all the time. People over politicians. This is why our rallies are drawing thousands of people. … We’re building a list of places to go, and we would love to come to your town,” she said.

“Here’s why the establishment, the media, the Democrats are shocked: They’re dazed and confused, because they never expected this out of me. The media basically tried to destroy Matt Gaetz with these fake allegations. And the media tried to destroy me right from the start. The Democrats are trying to take me out as we speak. They have the resolution to expel me. Just yesterday, Steny Hoyer was calling for me to be expelled from Congress, but I’ve done nothing wrong,” Rep. Greene said. Video Below

“Americans are seeing the truth and their coming out by the thousands to stand with me and fight for our American First policies, because the people of this country– we aren’t just going to lay down to socialism like the Democrats want. We’re the American people that are going to stand up and stop it. … This is why the establishment is losing their mind,” she added.

(Related: Rep. Greene: “Joe Biden Is On Record For Abusing His Office & Abusing The Positions He Holds…He’s A Danger To America”)