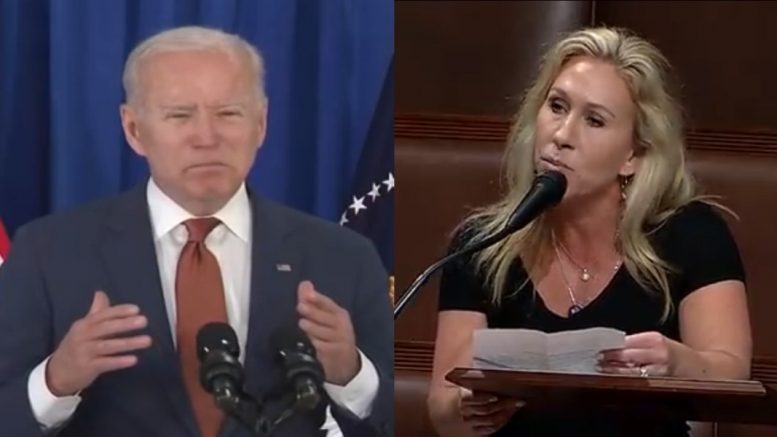 Congresswoman Marjorie Taylor Greene (R-GA) sent a letter to Joe Biden on Friday, “demanding an investigation immediately” regarding “the cover up of the origins of the Chinese virus”.

Rep. Greene requested that Biden’s Department of Health and Human Services (DHS) provide answers to several questions regarding “the funding, origin, and activities at the Wuhan Institute of Virology. The letter comes just days after a trove of emails belonging to Dr. Anthony Fauci were released to the public through a Freedom of Information Act (FOIA) request.

“The American people have suffered more than enough from the novel Coronavirus, a manufactured plague created at the Wuhan Institute of Virology and released on the world in November 2019,” Rep. Greene wrote.

She detailed in the letter the number of reported deaths ultimately caused from the virus and the impact it has caused on the economy and schools from the shutdowns.

“Combine the hardships with the troubling emails recently released which implicate Dr. Anthony Fauci, your chief medical advisor and Director of the National Institute for Allergy and Infectious Diseases, explicitly contradicting the guidance forced upon the American people for more than a year to wear masks, obtain a vaccine, and stay isolated. While your administration has repeatedly asserted the ‘science’ of wearing masks to solve the spread of the virus, Dr. Fauci privately advised members of the pubic not to purchase or wear masks on the grounds that it does not comport the science. This is negligent at best and duplicitous at worst,” the lawmaker wrote.

“These actions demonstrate an ongoing attempt by your administration and the media to propagate a false narrative surrounding this virus that is neither based on science nor consistent with the private statements of Dr. Fauci. As a result, large portions of the American public no longer believe in the validity of the narrative surrounding the virus, origin, or the proper steps to counter its spread. The decision by your administration have led to an enormous decline in public trust and demand oversight and accountability from Congress,” Rep. Greene said. Continued Below

In the letter, Rep. Greene demanded answers to the following questions:

“Furthermore, we remain convinced Dr. Fauci mislead the American public regarding the origins, transmission, and mortality of the COVID-19 pandemic. Not only his private correspondence, but his ongoing contradictory advice on use of masks, vaccines, and social distancing and isolation demonstrates either incompetence or deception,” the Georgia Congresswoman wrote.

“Dr. Fauci’s testimony before the Senate … is directly contradicted by the recently released emails. For these reasons, we believe Dr. Fauci should be removed from his position. If your administration does not act to remove Dr. Fauci, we will consider impeachment articles against him on the grounds of misleading Congress and perjury,” she warned. Continued Below

“Almost 600,000 Americans have died because of this Chinese-made virus. It is past time the American people begin receiving answers from their government instead of propaganda, mandates, and restrictions,” Rep. Greene expressed.

She urged the administration to provide the answers by the end of this month.

It’s time to hold Fauci accountable for his lies and potential involvement in the cover up of the origins of the Chinese virus.

Read my letter to the White House demanding an investigation immediately. https://t.co/iToSBuDgJG

Apparently his handlers haven’t let him see the Fauci emails.