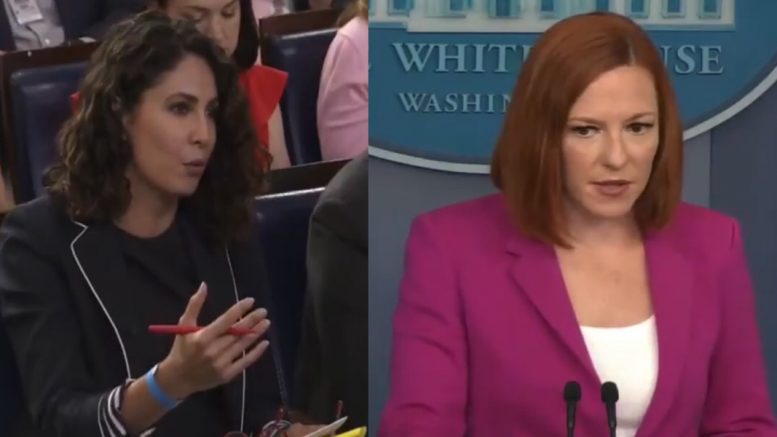 Cecilia Vega, chief White House correspondent for ABC News, asked Psaki: “Real quick if I can follow up on voting rights here. Yesterday, you said that there’s more work to be done, among that is including engaging in state legislatures, but the problems as Democrats at least see it is not problems in blue state legislatures; it’s Republican-controlled states where many of these decisions are already being made. So what leverage do you actually have and what realistically do you think you can accomplish in some of these red states?”

Jen Psaki responded, telling reporters that the Biden administration’s efforts have been “a federal approach that is needed.”

“I think it’s important to remember why we’re at this point on state legislatures … across the country, are passing a wave of anti-voter laws based on the same repeatedly disproven lies that led to an assault on our nation’s capital,” Psaki claimed.

“They are putting these laws in place because they did not like the outcome, and they’ve continued to perpetuate a lie about the outcome of the election. That’s why we’re here,” Psaki alleged.

Psaki stated that Joe Biden and Kamala Harris will engage with voting rights groups and state lawmakers “who are supportive of expanding access to voting in the country”, further claiming that even in red states, there are “many” Democratic legislators who support the White House’s agenda. Continued Below

Psaki also said that the Biden administration will continue “to fight to get legislation across the finish line on the federal level.” Psaki said that “the fight is not over” and that “no matter the outcome today, [the fight] is going to continue.”

Under the guise of lambasting so-called “anti-voter laws” that seek to ensure election security, the Biden administration has been using the Jan. 6 breach to justify federal overhaul despite constitutional clarity on state’s rights, noted The Post Millennial.

Psaki reiterated that Biden is “absolutely revolted by the wave of anti-voter laws based on the same repeatedly disproven lies that led to an assault on our nation’s capitol…”, adding that the federal government “shares the desire to fight against efforts by many Republicans to suppress the vote around the country.” Video Below

Psaki says President Biden is "absolutely revolted by the wave of anti-voter laws based on the same repeatedly disproven lies that led to an assault on our nation's capital." pic.twitter.com/ubILrqJ0LT

The For the People Act legislation has passed the House with little GOP support. Democrats numbered the bill HR 1 to designate it as the party’s top legislative priority. But in the Senate, where Democrats control just 50 out of the 100 seats, bipartisanship is necessary to pass anything with the 60-vote threshold in place.

Senate Republicans are poised to block the sweeping election reform bill and defeat the proposal Tuesday as Republicans are prepared to use the legislative filibuster to stop any debate on the For the People Act from proceeding.