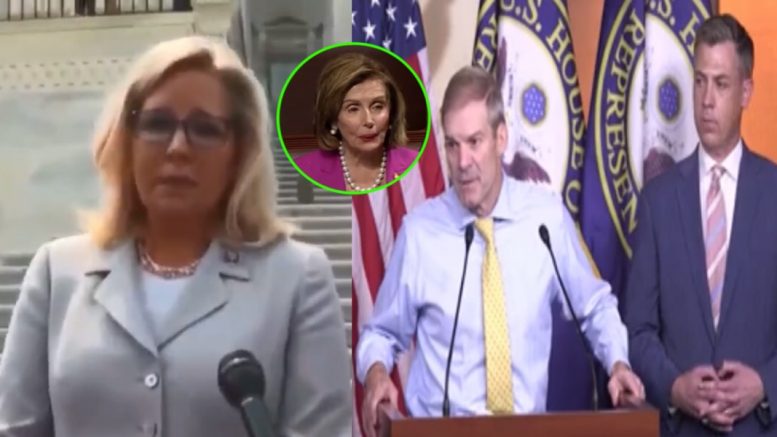 Pelosi cited the “integrity” of the probe in refusing to accept the appointments of Rep. Jim Banks (R-IN) and Rep. Jim Jordan (R-OH). McCarthy, however, said the GOP won’t participate in the investigation if Democrats will not accept the members he appointed, as previously reported by Swamp Drain.

Liz Cheney, who Nancy Pelosi picked as one of her panelists, was asked by reporters about the House Speaker’s decision to reject Reps. Jordan and Banks from sitting on the January 6 Select Committee, and specifically if she urged Pelosi to make the move.

“I agree with what the Speaker has done,” Cheney told reporters outside the Capitol.

House Minority Leader Kevin McCarthy said in a statement Thursday that he would pull every Republican member from the House Select Committee after Pelosi rejected the recommendations of Jordan and Banks.

“Unless Speaker Pelosi reverses course and seats all five Republican nominees, Republicans will not be party to their sham process and will instead pursue our own investigation of the facts,” McCarthy stated. Video Below

"I agree with what the Speaker has done," says Rep. @Liz_Cheney on Speaker Pelosi's decision to not seat Reps. @Jim_Jordan and @RepJimBanks on the Jan 6 Select Committee pic.twitter.com/M25HqtNeAc

Liz Cheney also said that she does not think Kevin McCarthy should be House Speaker.

Pelosi announced in late June that she would be establishing the select committee. The House then approved a resolution to form the committee weeks after Senate Republicans killed a bipartisan commission in late May. The House Select Committee announced it will hold its first hearing July 27, Daily Caller reported. Continued Below

We leave you with a few reactions to Cheney’s remarks:

Liz Cheney's internal polls must be SO BAD that she has finally figured out that her only future in politics is in the Democrat Party…So of course 👇 https://t.co/nwRJfGLyIN

She should just go ahead and join the Democrat Party.

I’m sure Nancy Pelosi would welcome her in with open arms.

She practically already has..

When will Liz Cheney officially switch to the party that she truly represents?

We don’t want her in the Republican Party any longer!

She is a disgrace!

Ok @GOPLeader, what are you going to do about @Liz_Cheney?

If @Liz_Cheney had any integrity at all she would step down from this sham commission. But she doesn’t and that’s why she’s going to get clobbered in a primary this cycle. https://t.co/q5rA9bWo89

If Liz Cheney wants to serve on the sham January 6th commission then she should be forced to switch parties.