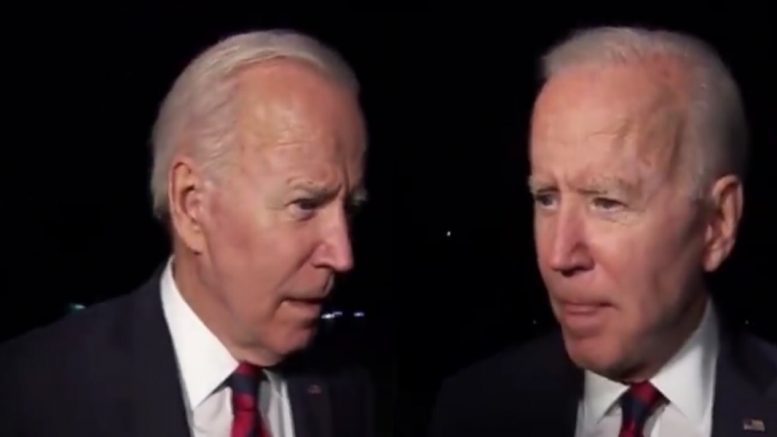 78-year-old Joe Biden was asked by a reporters on Wednesday about the Democratic Party’s anti-police position, however, Biden ultimately diverted, attacking the Republican Party.

“Mr. President, can you clarify what you said about no — that there’s no — no one in the Democratic Party is anti-police?” a reporter asked Biden, in which he responded, “I didn’t say that.”

“I know that you said you don’t want to defund the police…”, a reporter told Biden.

“Okay. And are there people who — in the Democratic Party, who want to defund the police?” a reporter then pressed Biden.

“Are there people in the Republican Party who think we’re sucking the blood out of kids?” Biden bizarrely asked. Video Below

Joe Biden was given the chance to condemn the Democrat-run cities defunding the police around the country, but he refused.

Instead, he bizarrely responds: “Are there people…who think we’re sucking the blood out of kids?” pic.twitter.com/LpOaQSTGed

The comment has sparked mockery and condemnation on social media, with many also expressing befuddlement. Some users on Twitter were left puzzled and criticized Joe Biden after he claimed that Republicans allegedly believe Democrats are “sucking the blood out of kids” during the exchange with a reporter, Fox News reported.

Anyone else concerned how obsessed Joe Biden is with sucking blood out of kids?pic.twitter.com/VC8erjCGA6

& the best part is, it was on the tip of his tongue. It’s something he thinks about haha

Do you think about this often Joe? LMAO pic.twitter.com/PxRsWLNt5S

Biden really just responded to a reporter this way. 😬 pic.twitter.com/4FbmtMqjlS

Joe Biden’s comment came after he made a similar remark about “sucking the blood of children” during a CNN town hall event hosted by Don Lemon, saying the country needs to “get beyond” such “QAnon” conspiracy theories.

President Biden laments the spread of QAnon and other conspiracy theories that have gained traction in the US: “The kinds of things that are being said of late … this is not who we are” #BidenTownHall https://t.co/LYc6cEPURA pic.twitter.com/5QV75Yf9U5

CJ Truth explained on Telegram in March the difference between Q and Anon: