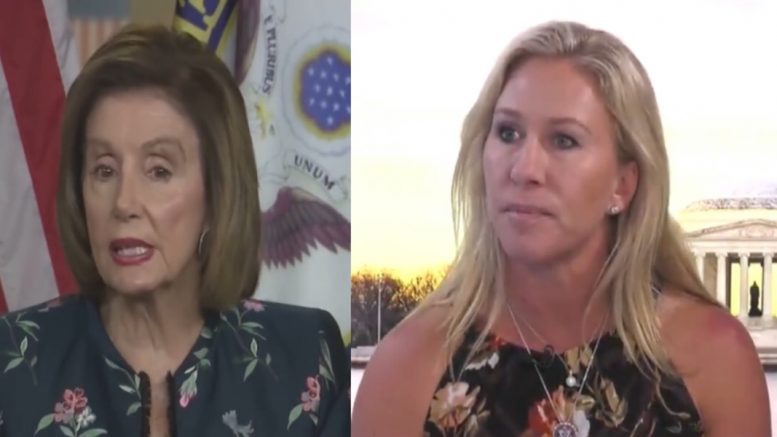 Congresswoman Marjorie Taylor Greene (R-GA) is leading the charge in calling for Nancy Pelosi (D-CA) to “vacate the Chair”, asserting that the “Speaker of the House is unfit to serve.”

Asked if House Speaker Nancy Pelosi may have to some things to hide regarding protesters at the Capitol on January 6th, Rep. Greene replied, “Absolutely.”

“She wants these committee hearings to go on behind closed doors, because she wants to hide it all from the public, and that’s what she has to do. She has has to get rid of the Republicans that aren’t afraid of her, like me, like Jim Jordan, like Jim Banks, because we will not be silenced and will tell the truth to the American people,” the Georgia congresswoman said.

On Wednesday, Pelosi rejected two Republicans selected by House Minority Leader Kevin McCarthy (R-CA) to sit on a committee investigating the January 6th Capitol protest, a decision McCarthy denounced as “an egregious abuse of power”, as previously reported by Swamp Drain. Continued Below

The House Speaker cited the “integrity” of the probe in refusing to accept the appointments of Rep. Jim Banks (R-IN) and Rep. Jim Jordan (R-OH). McCarthy, however, said the GOP won’t participate in the investigation if Democrats will not accept the members he appointed.

“Speaker Nancy Pelosi has taken the unprecedented step of denying the minority party’s picks for the Select Committee on January 6. This represents an egregious abuse of power and will irreparably damage this institution. Denying the voices of members who have served in the military and law enforcement, as well as leaders of standing committees, has made it undeniable that this panel has lost all legitimacy and credibility and shows the Speaker is more interested in playing politics than seeking the truth,” McCarthy said.

“Unless Speaker Pelosi reverses course and seats all five Republican nominees, Republicans will not be party to their sham process and will instead pursue our own investigation of the facts,” the minority leader stated. Video Below

Asked what she can do as a congresswoman to lead an effort to push Pelosi out of her leadership position, Rep. Greene told David Brody, “We as a conference need to do it. I hope that our leadership is strong enough to do that. But we need to call to vacate the chair, and we have no confidence in her as Speaker of the House.”

“We need to have bold moves. This is a critical time in our history. We have regular Americans that are being targeted by the FBI. … Nancy Pelosi wants to take it the next level. So we in the GOP conference– it’s time for us to be serious. It certainly is. And I’m gonna be calling to vacate the chair. It needs to happen,” she urged.

BREAKING: Congresswoman @MTGreenee calls to vacate the chair of @SpeakerPelosi “we have no confidence in her as Speaker of the House”

Speaker Nancy Pelosi is the one responsible for ignoring Intel about J6 & NOT securing the Capitol!

She is unhinged in her political warfare against Trump & his supporters.

She only plans to use her J6 committee to persecute R’s.

She is mentally unfit to be Speaker!

The Speaker of House is unfit to serve! https://t.co/9geWTtMgpJ

(Related: Rep. Greene On House’s Commission To Probe Jan. 6 Capitol Events: “What About All The Riots That Happened During The Summer Of 2020”)