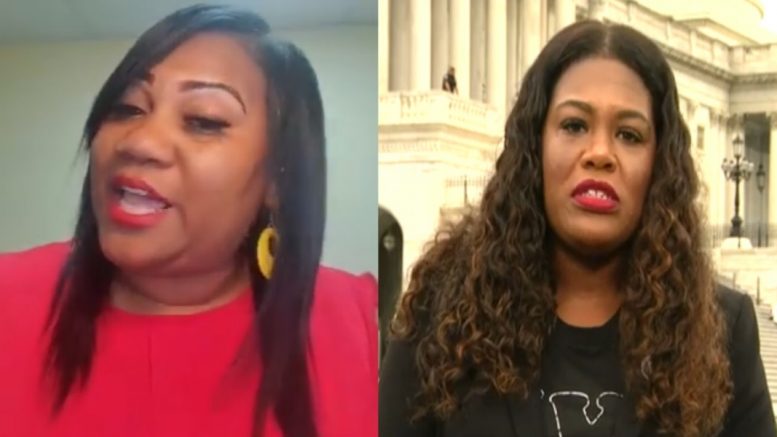 Rep. Cori Bush (D-MO) told CBS News on Wednesday that police officers “need” to be defunded, despite making sure she has her own “private security”, as previously reported by Swamp Drain.

“I’m gonna make sure I have security because I know I have had attempts on my life, and I have too much work to do. There’s too many people that need help right now for me to allow that,” Bush claimed.

“So if I end up spending $200,000, if I spend 10 more dollars on it– you know what? I get to be here to do the work,” Rep. Bush said. “So suck it up. … And defunding the police has to happen. We need to defund the police and put that money into social safety nets.”

Cori Bush: I’m going to make sure I have private security but defunding the police needs to happen. pic.twitter.com/6jbv4HLlGs

Republican candidate Lavern Spicer, who is running in 2022 for Congress in South Florida’s District 24, responded to Rep. Bush’s remarks in a video on Twitter Thursday, telling the Democratic lawmaker to “Sit down and shut up”.

“Cori Bush, it’s time to sit down and shut up. I know you didn’t just go on television and say you get to spend 200,000 dollars or whatever you want on private security and then, in the same breath, you say that you want to defund the police?” the 2022 Florida Congressional candidate asked.

“I hope you know how dumb that actually sounds. You learned well from your girl AOC about how to fake those death threats and all of that foolishness. Listen Cori: come back down to earth. We’re not going to defund the police. It’s not going to happen in our communities, especially in a community like Chicago. … On any given day, it’s over. 120 people shot in a day, and you’re actually talking about defunding the police? That’s sounds very dumb. Get that out of your mind,” Spicer urged. Video Below

“If you really cared about Black lives, you would be pushing forward for more protection for our communities instead of defunding the police. But you don’t care. You already got your police protection,” Spicer said.

.@CoriBush, come back down to earth girl.

I know that you didn’t just go on television and say that you get to spend $200,000 or whatever you want on private security and then in the same breath say you’re going to defund the police.

Sit down and shut up. See you in 2022. pic.twitter.com/WuhMdvXWwH

“You’re a classic example of what keeps the black community down,” she insisted. You made it. We understand, so you don’t care. You don’t give a damn about the rest of us. Especially for us that are in these Black districts that are ran, most of the time, by Black Democratic leadership. And we’re in these high-crime areas. We need the police protection. We cannot afford to not have the police protection,” she explained.

“And we know, of course, that you’re using George Floyd to make him a hero so that you can use that to defund the police. But have a seat. It’s time to start acting your age and not your shoe size. Cori, I’ll see you in 2022,” Spicer added.

I’m running for Congress in South Florida to rid my district of the Democrat folks that have kept it down for 20+ years.

We’re going to win this race with your help. I need you to donate today so I can tell fools like Cori to SHUT UP!