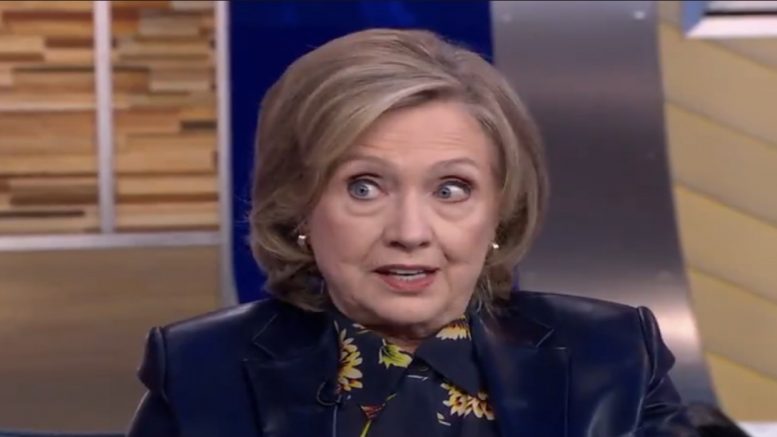 During a Monday interview on ABC News’ “Good Morning America”, twice failed Democrat presidential candidate Hillary Clinton, claimed she “will never be out the game of politics”.

While Clinton does not have plans to run for “anything”, she asserted that she will be “involved” and “help in some way”.

“I will never be out of the game of politics,” Hillary Clinton said, adding, “I’m not going to be running for anything”, but said she feels “our democracy is at stake”.

“I really feel our democracy is at stake, and there’s many reasons for that. Some of them we saw on the screen with the insurrection,” Clinton claimed, appearing to reference the events of the Capitol protest on January 6th, even though no one has been officially charged with “insurrection”.

“Some of them because of the revelations about Facebook that creates a world of disinformation instead of, you know, one that we can agree on what the facts are,” the former secretary of state said.

“I really am worried about what’s happening at home and around the world,” Clinton alleged. “So, I’m never going to get out of, you know, being involved, worried and hopefully, trying to help in some way”. Video Below

NEW – Hillary Clinton says she will "never be out of the game of politics," claims "democracy is at stake" because of "disinformation" on the Internet.pic.twitter.com/lrcIWTJ0Vs

Most recently, a federal grand jury indicted a former attorney for the Democratic National Committee, Michael Sussman, alleging that he falsely claimed to the FBI that he was not advising Hillary Clinton’s 2016 presidential campaign when he raised concerns about purported ties between the Trump Organization and a Russian bank.

The case against Michael Sussmann, a cybersecurity lawyer at powerful Democratic firm Perkins Coie, is just the second prosecution brought by special counsel John Durham, who was tasked by then-Attorney General Bill Barr in May 2019 with looking into how the FBI’s investigation into claims Donald Trump’s 2016 presidential campaign coordinated with Russian government officials came to be, New York Post reported.

The FBI investigated the purported link between the Trump Organization and Alfa-Bank and found insufficient evidence to support it. The indictment notes that the server in question “was not owned or operated by the Trump Organization, but, rather, had been administered by a mass marketing email company that sent advertisements for Trump’s hotels and hundreds of other clients.”

Prior to the indictment of Sussmann, the other criminal case brought by Durham was against Kevin Clinesmith, an FBI lawyer who altered an email related to the surveillance of Trump campaign adviser Carter Page to obscure the nature of Page’s pre-existing relationship with the CIA. Clinesmith pleaded guilty to a charge of falsifying documents in August of last year and was sentenced to probation. Continued Below

(Related: Trump Reacts To Ex-FBI Lawyer Clinesmith Who’s Expected To Plead Guilty: “They Spied On My Campaign & They Got Caught”)