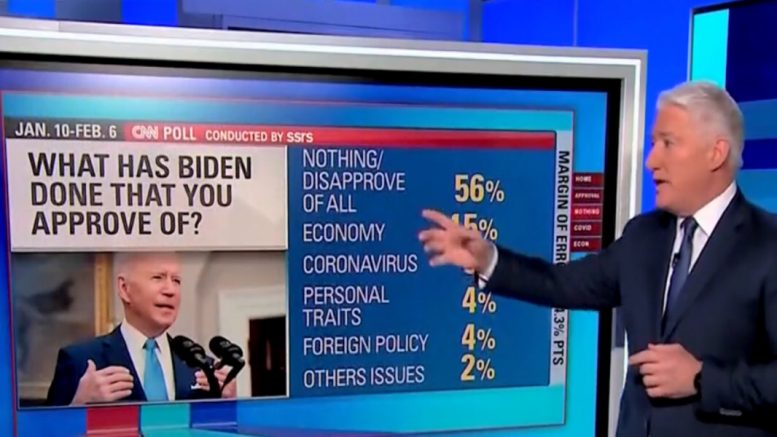 Nearly 6 in 10 Americans disapprove of how Joe Biden is handling his presidency, with most of that group saying there’s literally nothing Biden has done since taking office that they approve of, CNN reported on Thursday.

The finding, from a CNN Poll conducted by SSRS in January and February, highlights the entrenched politics driving the nation at the start of the midterm year, with little agreement across party lines on priorities for the government or how to handle the coronavirus pandemic, per CNN.

The poll also revealed just 37% approve of Biden’s handling of the economy, while 62% disapprove. Another 58% disapprove of the president’s job overall, with only 41% approving.

“We asked people, ‘What has President Biden done for you that you approve of?'” King said. “Fifty-six percent of Americans, nearly 6 in 10 Americans — that means a decent amount of Democrats — said ‘Nothing.'”

“They disapprove of everything that has happened,” he added. Video Below

Additionally, the poll revealed 70% feel burnt out, 60% are angry, 58% are worried, and 49% are confused regarding the pandemic. Only 47% remain optimistic.

CNN: 56% of Americans say "NOTHING" when asked what President Biden has done that they approve of.

"Look at how bad these numbers are." pic.twitter.com/8CUbwT1xme