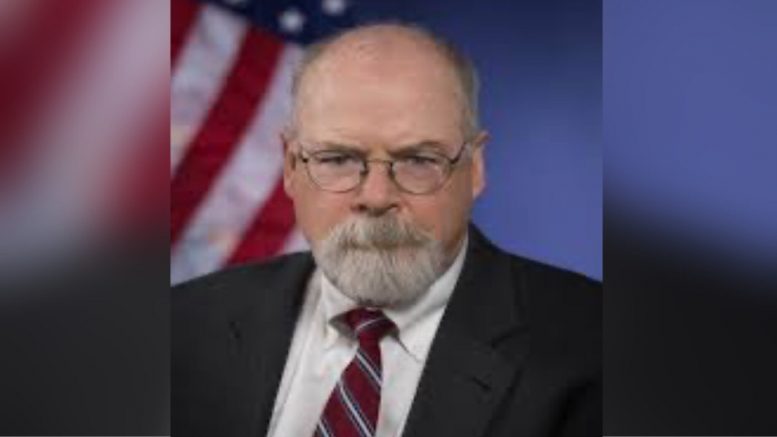 On February 11, 2022, Special Counsel John Durham filed the government’s motion to inquire into potential conflicts of interest in the Michael Sussmann case. Sussmann was charged with giving false statements to then-FBI General Counsel James Baker regarding the interests he was representing in pushing to the FBI the Alfa Bank/Trump Organization hoax.

The basis for the motion is that Sussmann’s current counsel, Latham & Watkins LLP (Latham) might have a conflict of interest because Latham previously represented Perkins Coie and Mark Elias “in this investigation.” It is alleged that Latham “likely possesses confidential knowledge about Perkins Coie’s role in, and views concerning, Sussmann’s past activities.” (Cleaned up.), Techno Fog reported.

Rodney Joffe (identified as Tech Executive-1 in the Sussmann indictment and in the latest filing discussing the conflict) exploited proprietary – and perhaps classified – data provided by DARPA to further their own political attacks, and how that might result in charges. It was later confirmed that two former DARPA employees have given grand jury testimony.

According to Durham, Joffe and his associates exploited internet data from “the Executive Office of the President of the United States” to further their own political agenda. They had come to possess this data as part of a “sensitive arrangement” with the U.S. government. Continued Below

Joffe and his associates manipulated this information to further a conspiracy theory that Trump and those in Trump’s orbit were continuing their secret backchannels with the Russians. This was repackaged with the Alfa Bank hoax and given to Sussmann, who then laundered it to the CIA on February 9, 2017.

Sussmann alleged to the CIA that the data showed “that Trump and/or his associates were using supposedly rare, Russian-made wireless phones in the vicinity of the White House and other locations.” Durham “identified no support for these allegations”. Continued Below

This wasn't limited to the Office of the President of the U.S.

They also exploited data from Trump Tower, another Trump building, and a "healthcare provider."

More on the conflict of interest re: Joffe lawyers and Sussmann lawyers. ht @HansMahncke pic.twitter.com/n9SGbrC4J9

Read the 13 page: GOVERNMENT’S MOTION TO INQUIRE INTO POTENTIAL CONFLICTS OF INTEREST

45th President Donald J. Trump told Kash Patel in an interview this week of Durham’s investigation, “I wish it were faster. … But he did come up with some really interesting stuff with the lawyers and Sussmen and all of these people.”

“And I hear there’s a lot coming. I think the jury is out, so we’re gonna see what happens, but I think what he’s doing, is one of the most important jobs being done right now in America,” he said.

Former Director of National Intelligence John Ratcliffe announced in October that he handed over nearly 1,000 pages of materials to the Justice Department to assist with Durham’s investigation into the origins and conduct of the Russia investigation.

“Michael Sussmann’s is the first of what I would hope would be a number, based on the fact — I provided not just those declassified documents, but I provided 1,000 intelligence community documents that I think support additional charges that I would expect John Durham to bring,” he told host Maria Bartiromo on Fox News‘ “Sunday Morning Futures“.

DNI John Ratcliffe “I provided not just those declassified documents but I have provided thousand intelligence community documents that I think support additional charges that I would expect John Durham to bring …” pic.twitter.com/C6ChX7cnn6

The report claimed former Secretary of State Hillary Clinton planned in July 2016 on tying then-candidate Donald Trump to Russia’s hack of the Democratic National Committee to distract from her improper use of a private email server.

Former Congressman Devin Nunes (R-CA) told Jan Jekielek recently, “The American people are depending on John Durham to hold people accountable. This is a dark chapter in American history that hasn’t been closed yet. People need to pay the price. … People have to be brought to justice.”

.@DevinNunes tells @JanJekielek The American people are depending on John Durham to hold people accountable. It’s a dark chapter in American history that hasn’t been closed yet. pic.twitter.com/2hW67cZwfS

(Related: Devin Nunes: “We’ve Made 14 Criminal Referrals To The DOJ — We Expect Durham To Do His Job”)