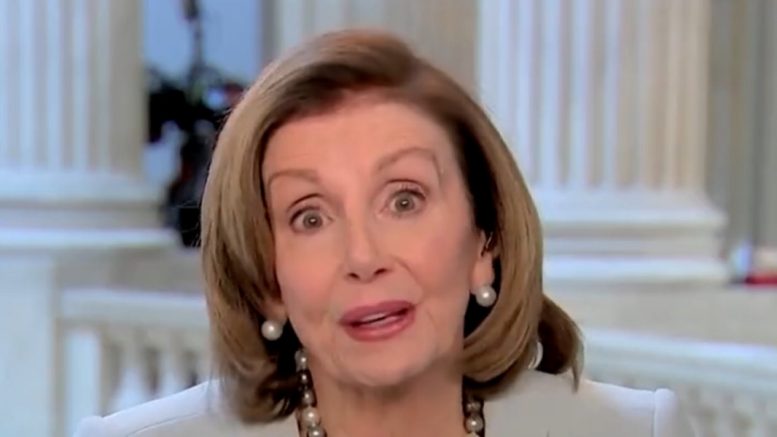 During a Tuesday interview on MSNBC, House Speaker Nancy Pelosi (D-CA) was pressed by anchor Andrea Mitchell over the state of the economy and declining poll numbers, ahead of 79-year-old Joe Biden’s State of the Union address.

“The polls show Americans deeply pessimistic about the economy. Inflation is only going to rise with what’s happening on the energy front with this war,” Mitchell told Pelosi.

“What do you attribute to that — the decline in the president’s polls, even on Covid — on how he’s handled it — what can he do to turn this around?” Mitchell asked the House Speaker.

Pelosi replied, “Well, I think tonight’s going to be very important, because for people to appreciate what the president has done, and working together with the Congress, they have to know what it is”.

“President Lincoln said, ‘Public sentiment is everything. With it, you can accomplish almost everything, without it, practically nothing’. But people have to know for public sentiment  — and so, of course, we’re very proud that the president has and his term”, the 81-year-old Democrat said.

“… 6.6 million jobs were created, of course, the private sector had a role in that. The unemployment rate has come down from 6.9 to just under 4%. The issues related to the well-being of the American people are being well-served, but people are still suffering. They have kitchen table concerns, and that’s where their reactions springs from. … We do have to build America better, and that’s what [Biden] is doing. … I’m really very, very proud of him,” Pelosi claimed. Video Below

Nancy Pelosi says Americans have a low opinion of Joe Biden because they are ignorant: "For people to appreciate what the president has done…they have to know what it is." pic.twitter.com/LgQQ9pVKDP

Meanwhile, a new poll shows that more than half of U.S. voters hold a negative view of House Speaker Nancy Pelosi, D-Calif., and say that her stepping down would be “good” for the country, according to Rasmussen Reports.

The survey asked voters if they had a favorable or unfavorable view of Pelosi and found:

More than half also said that it would be “good” for the country if Pelosi stepped down as House speaker.