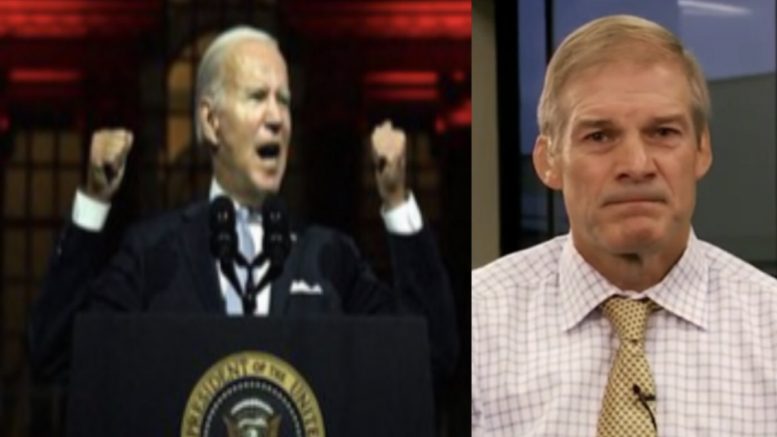 “You gotta call your opposition names when you got nothing else to talk about”, Rep. Jim Jordan (R-OH) said Tuesday of 79-year-old Joe Biden’s latest attacks on so-called “MAGA Republicans” ahead of the November midterms.

“We went from safe streets to record crime … a secure border to no border … two dollar gas to five dollar gas … stable prices to record inflation, so call me extreme if I want stable prices, affordable energy, if I actually want to have a secure border. Call us extreme; I guess that’s what you’re going to do when you got nothing else to talk about,” Rep. Jim Jordan said.

“In the past 4 weeks, Joe Biden has raided the home of a former president, taken the phone of a sitting member of Congress, called 1/2 of the country fascists and extremists. [He] said to those people, ‘Oh, by the way, we’re gonna make you pay the student loan debt of someone else’. Finally, he unleashed 87,000 IRS agents to come harass you, the American taxpayer. Such a deal,” he sarcastically quipped.

“So I guess he’s gonna call us names after doing those kind of extreme things. He can do that, but I don’t think it sells,” the Ohio congressman said.

Jordan added: “If [Biden] wants to put President Trump on the [November midterm] ballot, great. I think that’s good, [be]cause Americans remember how good we had it under President Trump.” Video Below

Related: Rep. Jim Jordan: “Big Tech Is Out To Get Conservatives. That’s Not A Suspicion, That’s Not A Hunch. That’s A Fact”