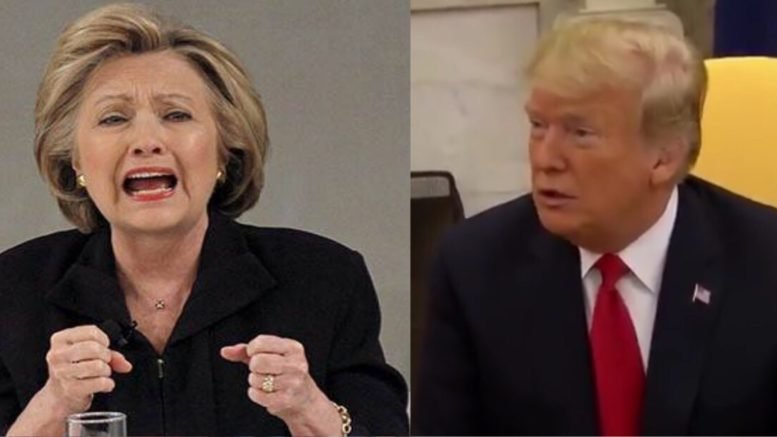 In an hilarious response to shunned and failed 2016 Presidential nominee Hillary Clinton, President Trump spoke openly and frankly to a reporter’s question.

With great transparency the President responded to Hillary’s comment about Justice Kavanaugh’s swearing-in ceremony. (VIDEO BELOW.)

Hillary was “in an interview with CNN’s Christiane Amanpour, parts of which aired Tuesday morning on the network, Clinton said that the way Trump carried out the event “troubles me greatly.”

Furthermore, Hillary ventured to TURN THE TABLES after the Democrat’s tried relentlessly to undermine America’s DUE PROCESS by convicting Kavanaugh to false accusations of sexual misconduct for political gain. Not even caring that they destroyed Kavanaugh’s impeccable reputation in the public eye.

“What was done last night in the White House was a political rally,” Hillary said and “it saddens me because our judicial system has been viewed as one of the main pillars of our constitutional government,” as reported by NBC.

Certainly, it ‘troubles her greatly’ that a great conservative Justice is now on the High court. His conservative perspective evens the balance of the Court 5 to 4. Favoring the conservative approach to the constitution. (VIDEO BELOW.)

President Trump is asked about her response! And his response sends Hillary back to the drawing board!

You can hear the reporter ask in the video below, “What is your response to Hillary Clinton saying last night’s swearing-in of Justice Kavanaugh was more a political event than it was a National event?”

Without missing a beat, President Trump responded, “I guess that’s why she lost. She doesn’t get it. She never did. I knew that a long time ago. Hillary never got it.”

With a twinkle in his eye he said, “That’s why she lost.” Then he ended on an up note and asked, “Anything else?”

WATCH as President Trump responded to Hillary’s attempt at destroying the ceremony for Brett Kavanaugh and his family and America.

Asked about Hillary Clinton’s comment that Brett Kavanaugh’s swearing-in ceremony last night was a “political rally,” Pres. Trump says, “I guess that’s why she lost. She doesn’t get it. She never did.” https://t.co/UByMwFjDLC pic.twitter.com/x80vrEH9xV

Watch the ceremonial swearing-in of Justice Kavanaugh from the East wing of the White House.

Related Article: Moments Ago, Trump Gave Justice Kavanaugh A Heartfelt Apology On Behalf Of The Nation

In closing, it doesn’t look like a political rally – Hillary DID get that wrong…again. #KAG2020. Keep America Great!