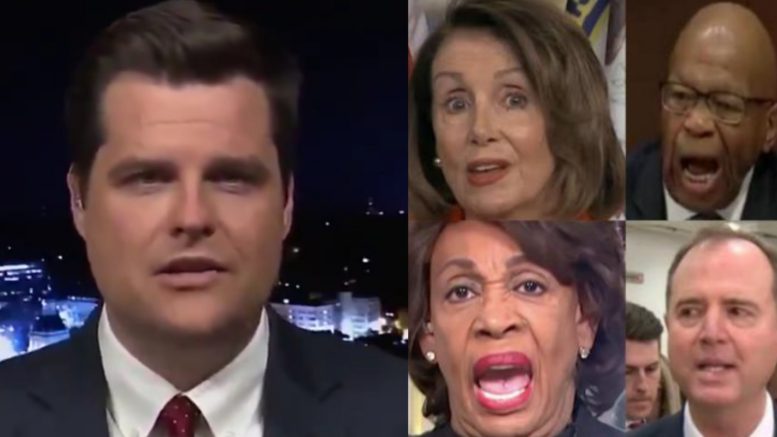 There is a lot that has to happen as our country prepares for the 116th Congress which begins in January of 2019. The Republicans will keep control of the Senate but the House will go to a Democratic majority.

Republican Congressman Matthew Gaetz (R-FL) explained exactly how handing the reigns over to the Democrats in the House will affect the current House investigations into the Obama-era corruption and who needs to be at the helm of the House Judiciary committee for the Republicans. (VIDEO BELOW.)

Matthew Gaetz discussed the House, Investigations and SWAMP DRAINING and WHO can help it all go smoothly for 2019 for the Republicans.

Gaetz has a plan so that the Democrats do not suppress all of the hard work the Judiciary Committee has completed on the Hillary Clinton, FBI, FISA, SPYGATE and other Obama-era scandals.

Matthew said, “the Republican investigations here have been too slow. And too secret. Here we are in a lame duck Congress. And only now are we having subpoenas go out to Comey and Lynch. Those should have happened immediately when the Inspector General issued his report that showed that there were these irregularities in the Hillary Clinton investigation. That resulted in no-one really being held accountable when the law was not followed by Comey and by the others.”

“So when you look at the total sum of what the Republicans have done…. we drained the swamp by exposing him [James Comey], McCabe, Page,” Gaetz reminded America.

“In fact, the Inspector General said, ‘never before have the top layers of the FBI been cleared out like this.’ But the fair criticism of us that you and others have logged is that we just didn’t do it fast enough to actually hold Hillary Clinton” accountable, Matthew said.  (VIDEO BELOW)

Gaetz revealed the PERFECT Republican candidate in line for the House Judiciary Committee to KEEP DRAINING THE SWAMP.

Matthew would like to see Jim Jordan (R-OH) for the House Judiciary Committee Republican leader to counteract Adam Schiff’s (D-CA) expected showboating in the House.

With Jordan at the Republican helm of the House Judiciary  – the integrity of the current investigations will have a “fighter” to keep draining the swamp.

Gaetz tweeted, “The most important thing we can do as we prepare for Democrat control is to make sure @Jim_Jordan is the Republican leader of the House Judiciary Committee. We won’t have low energy oversight and we will have a real fighter.” (VIDEO BELOW)

WATCH VIDEO BELOW AS GAETZ TALKED ABOUT THE HOUSE, INVESTIGATIONS AND DRAINING THE SWAMP

Loretta Lynch was engaged in concealment of her own behavior, the FBI’s behavior, & the chain of command we are supposed to rely on even when it is stressed. I believe there would be appropriate bar grievances regarding the obstruction & frustration of justice that was occurring. pic.twitter.com/36fkHzjtlY

The most important thing we can do as we prepare for Democrat control is to make sure @Jim_Jordan is the Republican leader of the House Judiciary Committee. We won’t have low energy oversight and we will have a real fighter.