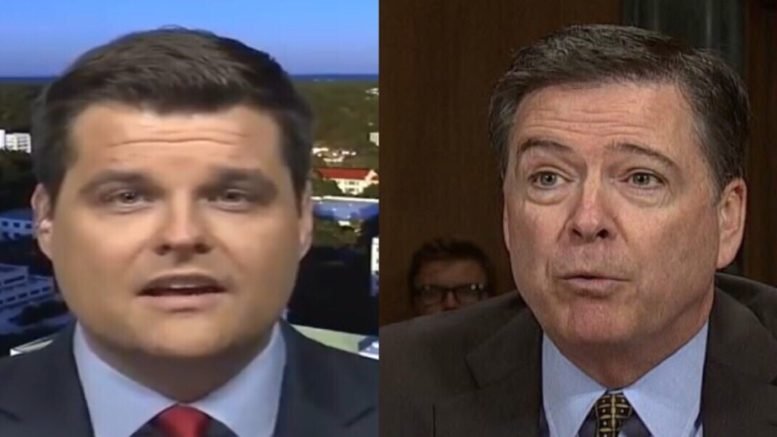 First, Comey refused to show up for the subpoena to Congress, then he wanted it to be public. Now he’s showing up, but Gaetz is not completely happy. (VIDEO BELOW.)

Gaetz is ripping the Speaker because the investigation took too long.

Matt Gaetz said, “We moved at such a snail’s pace, that now we only have days left in the legislative calendar.”

He went onto say, “And, we’re only now getting to James Comey? What a joke! This low-energy oversight is one of the reason’s I think we lost the majority.”

Harris is completely taken aback as she said, “Wow! Low energy oversight? But, it was oversight by your political team. What happened?”

Emphatically Gaetz replied, “We didn’t move fast enough. There were those in the Republican majority like Devin Nunes, Jim Jordan, myself, and Mark Meadows who were begging the speaker and the Judiciary Chairman, and the Oversight Chairman to schedule the interviews.” (VIDEO BELOW.)

“What we saw in the election is the economic message alone is not going to deliver the type of turn out we need to win in suburban America. We need to show people that we are actually doing our job,” Matt continued.

In ending, Matthew brought transparency up a level, and Harris was flabbergasted. She told him if he doesn’t get invited to any Christmas parties, he can go over to her house! (VIDEO BELOW.)