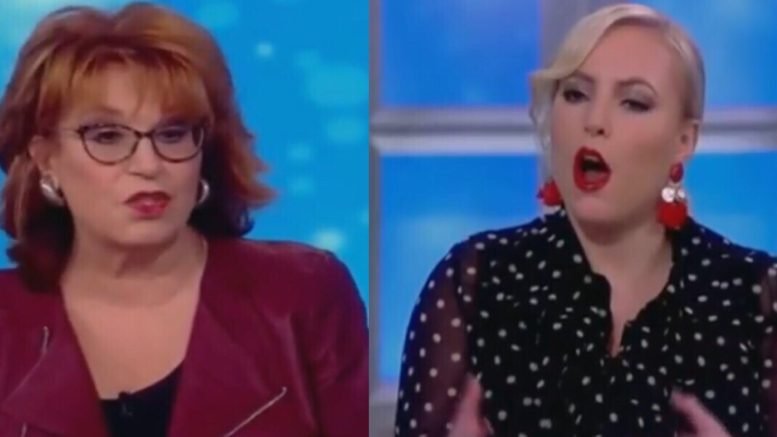 If there were ever a segment that leaves you scratching your head and wondering why anyone tunes into The View, this would be it.

When Trump hater Joy Behar turned President Bush’s remembrance segment into a political thrashing of Trump, Meghan McCain went “right” on her and left Behar swinging in the wind. (VIDEO BELOW.)

The View was a side-show on wheels this Monday morning.

As MSN reported, “If there was one thing it seemed most Americans could agree on this weekend it was that former President George H.W. Bush was generally a good man who had the country’s best interest at heart.”

Except at The View, in what can only be described as an attempt by Behar to turn things against Trump, McCain tried to bring it back to remembering #41.

Behar must have taken her “I hate America” pill that morning, because in an angry tone she literally yelled at McCain.

The exchange went something like this: Behar gave a shout out to President Bush because of his Clean Air Act. Then she said, “This president that we have now  — is going to unravel everything that he did and Obama did — and if I ever become a one-issue voter, it will be about pollution.” (VIDEO BELOW.)

Meghan stopped Joy in her tracks and said, “Can we focus on the president, please? I just, I don’t want to talk about Trump when we’re in a moment — when we’re honoring a great president.” Joyless Joy copped an attitude like she was the Queen Bee and combatively said, “Excuse me! Excuse me, please!”

Meghan in an even-handed voice said, “Okay, but we’re honoring — I’m not interested in your one-issue voter talk,.” Then, Joyless Joy turned nasty in a very angry tone she implored, “I don’t care what you’re interested in….I’m talking!”

Cooly, Meghan replied, “Well, I don’t care what you’re interested in either.” It was at this point that Whoopi Goldberg cut to a commercial before Joy’s “Trump Derangement Syndrome” went too far for damage control on national television. (VIDEO BELOW.)

WATCH MEGHAN SHUT DOWN BEHAR IN VIDEO BELOW: