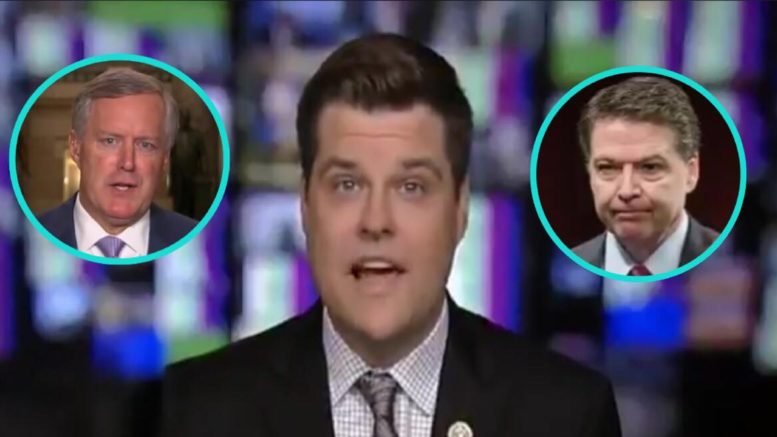 After participating in the hearing, Gaetz blasted Comey with some choice words. (Video Below)

James Comey attended an event in New York City hosted by MSNBC, where he called President Trump a co-conspirator in the cross hairs of Robert Mueller’s Russian probe.

According to Comey, President Trump is “close” to being an unindicted co-conspirator in Robert Mueller’s investigation of former Trump’s former lawyer.

“Not in the formal sense that he’s been named in an indictment, but if he’s not there, he’s certainly close, given the language in the filing that the crimes were committed at his direction.” Comey said.

Comey added that if Trump weren’t president, he would be exposed legally. “That person would be in serious jeopardy of being charged because the government wouldn’t make that sponsoring allegation if they weren’t seriously contemplating going forward with criminal charges,” he said. “Where it stands here I can’t say.” (Video Below)

While on Fox News, Gaetz hit back at Comey where he described in detail what occurred during the hearing and what Comey’s motives are since being fired from the FBI. “I learned that Jim Comey’s amnesia is very selective on any of the facts that are unfavorable to President Trump. He remembers them with great particularity when you try to create four corners about who knows about the communications, and who came into possession of the documents.” Gaetz added, “Then Comey becomes hazier and hazier on the actual details.”

“The leaking of Comey, the lying about it to Congress, inconsistencies about who came after him, Andrew McCabe, certainly, raises a lot of questions about how the FBI was operating during Comey’s leadership.” Gatez pointed out.

When asked directly in a pointed question whether he thinks Comey was hiding something or holding something back, Gaetz replied, “I think he did not want to give us the tools to be able to determine his inconsistencies.” (Video Below)

Rep. Matt Gaetz explained some of Comey’s inconsistencies, motives, and what’s next.

“He has this conversation with the President allegedly about Michael Flynn. He then memorializes it in a memo and goes back and talks about it with senior leadership at the FBI. He claims to remember with great detail what the President said, but when we asked ‘how did people at the FBI react? How did the General Counsel react? How did your Deputy Director react?’ He was unable to give any details as to the viewpoints they offered.” Gaetz said.

Next, he revealed why that was important. “He never told Jeff Sessions, the Attorney General. Sessions had not recused himself at this point, so we see themes with Comey that were reinforced by the Inspector General.” He revealed.

Gaetz continued, “Comey viewed the job of the FBI Director as something very different than it’s called. He thought it was appropriate to try and become a political hack, to influence the media, to try and create these links and this perception around their activity. We want an FBI that investigates the facts and then provides information to DOJ. We don’t want it to be an epicenter of political activity, and now Comey is absolutely on the trail.”

“You saw him yesterday. I think he will be very involved in the reelection campaign in 2020. It’s one of the reasons I think President Trump needs to pick Mark Meadows to be his Chief of Staff, because Mark fully understand the facts and the timeline and will make sure the White House is prepared to go toe-to-to with a far more politically engaged James Comey.” Gaetz said with confidence.

In response to President Trump’s announcement of interviewing people for the Chief of Staff position, Gaetz wrote on Twitter, “Mr. President, if you pick Mark Meadows (and I hope you do), who inherits the ‘Meadows Pass’ at the White House? #Asking4aFriend”

With certainty he added, “@RepMarkMeadows will be able to deploy counter measures to protect the institution of the presidency against, what I believe, is a very illegitimate attack from the left and from elements of the FBI and the DOJ.”

Mr. President, if you pick Mark Meadows (and I hope you do), who inherits the ‘Meadows Pass’ at the White House? #Asking4aFriend https://t.co/HsUzKA8uJ1

.@RepMarkMeadows will be able to deploy counter measures to protect the institution of the presidency against, what I believe, is a very illegitimate attack from the left and from elements of the FBI and the DOJ.