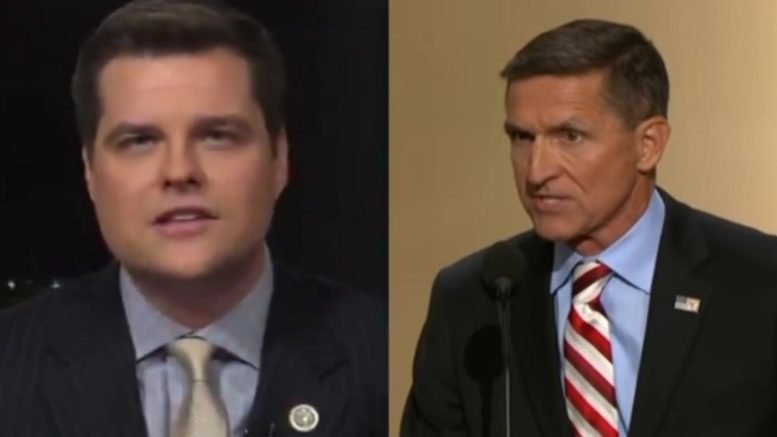 Matt Gaetz (R-FL) joined Jesse Watters on Fox News and discussed the difference between the FBI’s treatment of Michael Flynn and the way Hillary Clinton was treated.

It’s no secret Hillary Clinton’s investigation was handled with ‘kid gloves’. Additionally, Michael Flynn was not given any of the special favors afforded Hillary and company. (VIDEO BELOW.)

The double standard is stark, and the Flynn perjury trap set-up is even more stark.

Jesse Watters began his segment and discussed the idea of the Special Counsel setting Flynn up for perjury, and the idea for a Presidential pardon was born.

Matt Gaetz said, “I think President Trump should pardon Michael Flynn, because he is not being called to account for any bad actions he committed with malice — it’s largely a consequence of not remembering or – perhaps – stating something in a different context.”

“Even Comey said there was no indicia of lying when Flynn originally met with these folks,” Gaetz said.

“Now, Jesse, compare that to Hillary Clinton who had nine lawyers present. Several of her lawyers, that were present were actually fact witnesses that should not have been there,” Gaetz reminded everyone. (VIDEO BELOW.)

“For Hillary Clinton they roll out the red-carpet…they pave the yellow brick road to ‘no consequence’.”  — Matt Gaetz (R-FL)

Additionally, Gaetz pointed out that with Flynn, although there were no indications that he was lying, that Flynn is “facing serious consequences and I think the President can do right for Justice by pardoning Michael Flynn.”

Do you agree? Do you believe President Trump should pardon General Michael Flynn?

Flynn should be pardoned bc he is not being called to account any bad actions he committed with malice — it's a consequence of not remembering or stating something in a different context. Even Comey said there was no indicia of lying when Flynn originally met with these folks… pic.twitter.com/hovZhW4TYk