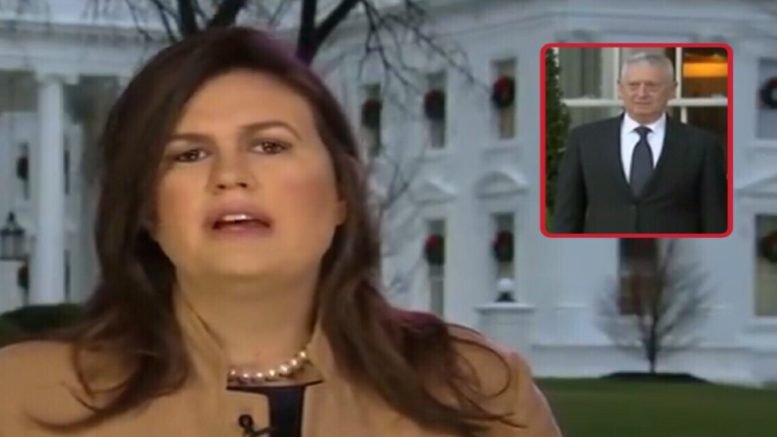 It’s no secret General ‘Mad Dog’ Mattis has resigned from his position as Secretary of Defense and will retire at the end of February.

Saagar Enjeti of the Daily Caller posted the resignation letter and Press Secretary Sarah Sanders gave her takeaway from the White House lawn. (Video Below.)

Sarah spoke out on the retirement of Secretary of Defense Mattis.

During a Fox News segment of Fox and Friends, Brian Kilmeade asked Sarah about General Mattis’s resignation. He said, “He’s leaving, basically, it seems because of the way the President treats our Allies, in his view? And the pull-out in Syria and Afghanistan seems to have been too much. How bad is the relationship, right now?”

Sarah responded smoothly, “Look. They continue to have a good relationship. But they disagree on a number of fronts that he outlined.” To view the resignation letter, scroll below to Enjeti’s tweet.

Sarah continued, “the American people elected one person to be the Commander-In-Chief and to make decisions. The President listens to all of his National Security team which is a big group. He takes their advice. And at the end of the day, he makes the decision. That’s what he was elected to do.”

“And if Secretary Mattis doesn’t feel like he’s the right person to fill that job,” Sarah said, “then I think it was the right thing and the honorable thing.” That President Trump “could put somebody in the position he feels like is the right person for that time,” Sarah ended. (Video Below.)

During the Obama-era there were four people who served as Secretary of Defense.

Sarah reminded everyone that Secretary Mattis has “served in this administration for two years. And he served the Country and the Military over four decades.” She also mentioned that Mad Dog is “an incredible person and an incredible servant to this Country.”

And since there seems to be some ‘bad press’ over Mattis’s resignation, it is important to note that Obama had four different people serve in the Secretary of Defense position.

In ending – from first to last – they were, Robert Gates, through 2011. Then Leon Panetta until 2013 and Chuck Hagel through 2015. Lastly, there was Ash Carter who served until James Mattis began serving as the 26th Secretary of Defense in 2017. (Video Below.)

See the publication of General Mattis’s resignation letter. Saagar Enjeti with the Daily Caller tweeted, “MATTIS resignation letter: “Because you have the right to have a secretary of defense whose views better align with yours….I believe it is right for me to step down from my position”

MATTIS resignation letter: "Because you have the right to have a secretary of defense whose views better align with yours….I believe it is right for me to step down from my position" pic.twitter.com/R09bWcxb0j