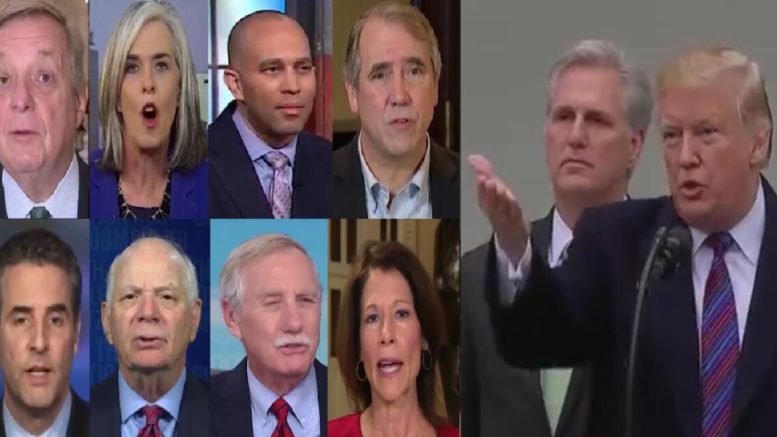 The White House, on Saturday, dropped off a video compilation where it exposes Democrats hypocrisy that proves they are playing politics.

However, a number of Democrats don’t agree with the far left and voiced their concern over border security. (Videos Below)

President Trump is keeping his promises as he has offered a strong, common sense proposal to stop gang members, drug smugglers, and human traffickers from exploding the U.S. southern border.

This week Democrat leaders exposed their indifference and denial when they called the situation at the border a “manufactured crisis.” It turns out, many Democrats, including former President, Obama don’t agree.

(Related Article: Pres Trump Thanks Obama For His Support On Border After Dems Claim A ‘Manufactured Crisis’)

The White House released a video amid the border crisis and the President trying to secure the border to keep America safe. Millions of Americans voted for President Trump to reverse decades of failure by Washington and fix America’s broken immigration system. (Videos Below)

As the video begins, the Commander in Chief announced, “There is a number of people who came out who said you do need very strong border security and that includes a wall or whatever it is.”

Rep. Cheri Bustos, (D-IL) is shown next where she said on CNN, “If we have fencing, if we have technology used to keep our borders safe, all of that is fine.”

Sen. Angus King, (I-ME) said on MSNBC, “There are places along the border where a wall makes sense.” (Videos Below)

Sen. Jeff Merkley, (D-OR) noted on CNN, “Some fencing is useful, some barriers are useful.”

Rep. Katherine Clark, (D-MA) said on MSNBC, “You know, I think there are parts of the border that would benefit from repairing fencing and other barriers that already exist.”

Sen. Dick Durbin, (D-IL) pointed out on CNN, “Well, I can tell you, we’ve had fencing in the past, I’m sure we will in the future.”

The video concluded with a big message across the screen that reads: “Speaker Pelosi: Your colleagues support a physical barrier at the border. STOP THE POLITICS. SECURE OUR BORDER. BUILD THE WALL.”

Stop the politics. Secure our border. Build the wall.

Stop the politics.
Secure our border.
Build the wall. pic.twitter.com/gflnWOefF6

President Trump is committed to stopping the crisis at our border, but the Democrats have already left Washington.

(Related Article: Trump RIPS Lawmakers On Vacation Amid Shutdown & Border Security: ‘I Am In The WH, Ready To Sign!’)

“We have a country that is being invaded by criminals and by drugs. And we’re going to stop it. So, I want the Democrats to come back to Washington and to vote.” President Trump demanded.

President Trump is committed to stopping the crisis at our border, but the Democrats have already left Washington. pic.twitter.com/wmbhFVnNQR