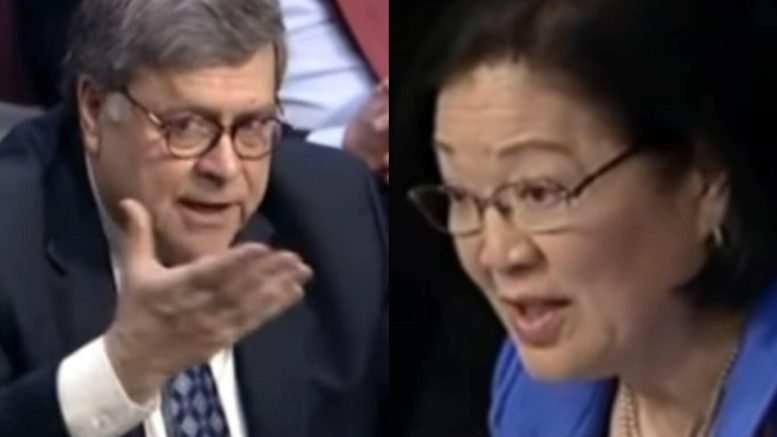 During the hearing on Tuesday, William Barr flustered Senator Mazi Hirono (D-HI) after he told her he won’t recuse himself from the Mueller investigation. He punted her idea back to Honolulu.

She pulled out her bias political card, was already on rebound, and you could just see her disgust in even having to participate in the hearing. She was huffing and puffing while “resist” was written on her forehead.

Hirono had a Trump derangement syndrome meltdown on the Senate floor for all to see when she began by attacking President Trump and flat out called him a liar. (Video Below)

“Someone who cares about the Department of Justice and the government, that’s a good thing, but you’ve agreed to work for someone who relentlessly attacks the press calling them fake news and the enemy of the people. The President criticizes the FBI nonstop. He belittles Generals. He calls the Mueller investigation a witch hunt.” Hirono whined.

She went on, “He believes the claims of Putin over the judgement of our intelligence community, and it’s been objectively verified that he lies every single day and changes his mind on a regular basis. So, are you concerned and having written about morality and consensus in our society?”

“Are you concerned about the way Donald Trump undermines the institution? It’s in our society that helped us to maintain a moral consensus.” She added. (Video Below)

“No, Senator. If I could make a point about the witch hunt, which is, we have to remember that the President is one that has denied that there was any collusion and has been steadfast in that. So presumably, he knows facts. I don’t know facts.”

Then he waved his hand around the room and said, “I don’t think anyone here knows facts.”

“But, I think it’s understandable that if someone felt falsely accused they would view an investigation as something like a witch hunt where someone like you or me doesn’t know the facts might not use that term.” Barr respectively responded.

Triggered Hirono couldn’t help herself and replied, “You’re certainly coming to his defense. As I said, it’s been objectively verified that he lies on a regular basis.”