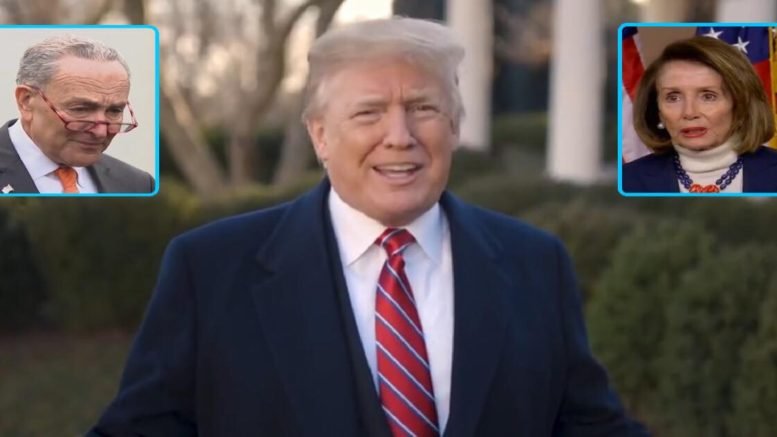 This time, in a text message sent out to his supporters, the Trump Make America Great Again Committee (TMAGAC) dropped a savage message to secure the border.

On Friday afternoon, the Trump Make America Great Committee, which is a joint fundraising committee composed of Donald J. Trump for President, Inc. (DJTP) and the Republican National committee (RNC), sent out a text message to fight to fund the wall and secure the border.

In the text message from “88022”, it read with a link to ‘Buildtheborderwall.com’, “Pres. Trump wants to send BRICKS to Chuck & Nancy for every donation of at least $20.20 in the NEXT HOUR. BUILD THE WALL! Donate now.”

Trump Jr. wrote, “Since Chuck and Nancy keep stonewalling the President, why don’t we send the wall to them, brick by brick, until they agree to secure the border!” (Continued Below)

At the website, you are able to choose between sending a brick to either Chuck or Nancy!

It reads: “President Trump came up with a brilliant idea to make sure Chuck and Nancy have no choice but to listen to the American people.”

The Trump team continued, “We have set a goal to send 100,000 BRICKS to their offices to prove that WALLS WORK! Please make a contribution of at least $20.20 by MIDNIGHT TONIGHT and we will send your brick directly to Nancy Pelosi’s office.” (Continued Below)

[CLICK HERE] to to send Chuck and Nancy a brick. 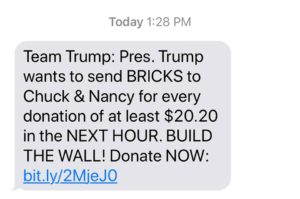 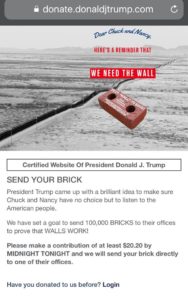 Since Chuck and Nancy keep stonewalling the President, why don’t we send the wall to them, brick by brick, until they agree to secure the border!

Thanks Lisa! The orders are flying in. Might hit our goal fastest ever!

Nancy and Chuck will get a different fact on the different faux bricks. They want to ignore facts, we will make sure they see the crime, drugs, and trafficking facts that comes over the border. https://t.co/sXGK8bc6pk