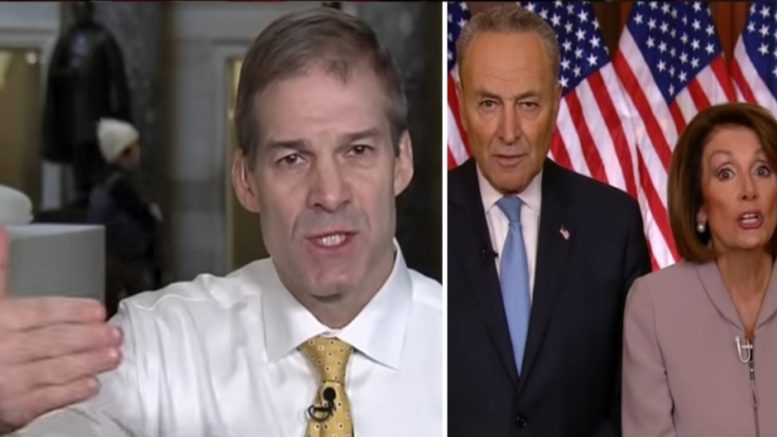 Friday marked a critical day between Democrats and Republicans as a newly passed bill allowed for government to be reopened up to three weeks while negotiations can take place between the two parties.

Over the course of the temporary government shutdown, Republicans have been anxious to work out a deal with Democrats that will include funding for a wall in the budget. Democrats, however, have been reluctant to negotiate, and gave the excuse that they will do so once the government is opened.

Republicans have fulfilled their end of the bargain to allow for talks to begin by approving the bill to temporarily open government. As a result, the pressure is now on Democrats to stand behind their words and show willingness to work out a deal.

Jim Jordan was among the first of Republican leaders to turn up the heat on Democrats, specifically Nancy Pelosi and Chuck Schumer, now that they got their wish of government reopening as a clause to negotiate.

Jordan released a statement via social media once the government was reopened. See Below

In a tweet, Jordan said, “Democrats have said for over a month they’ll negotiate when the government opens.”

Jordan then declared, “If not, the President should use his lawful emergency powers. #DoWhatWeSaid” See Below

Democrats have said for over a month they’ll negotiate when the government opens.

If not, the President should use his lawful emergency powers. #DoWhatWeSaid

On Saturday morning, President Trump kept up pressure on Democrats with the following tweets.

“I like the fact that the President is making the case (Border Security & Crime) to the American people. Now we know where Nancy Pelosi, Chuck Schumer & the Democrats stand, which is no Border Security. Will be big 2020 issue.” Matt Schlapp, Chair, ACU. Bigger than anyone knows!

21 days goes very quickly. Negotiations with Democrats will start immediately. Will not be easy to make a deal, both parties very dug in. The case for National Security has been greatly enhanced by what has been happening at the Border & through dialogue. We will build the Wall!

We have turned away, at great expense, two major Caravans, but a big one has now formed and is coming. At least 8000 people! If we had a powerful Wall, they wouldn’t even try to make the long and dangerous journey. Build the Wall and Crime will Fall!