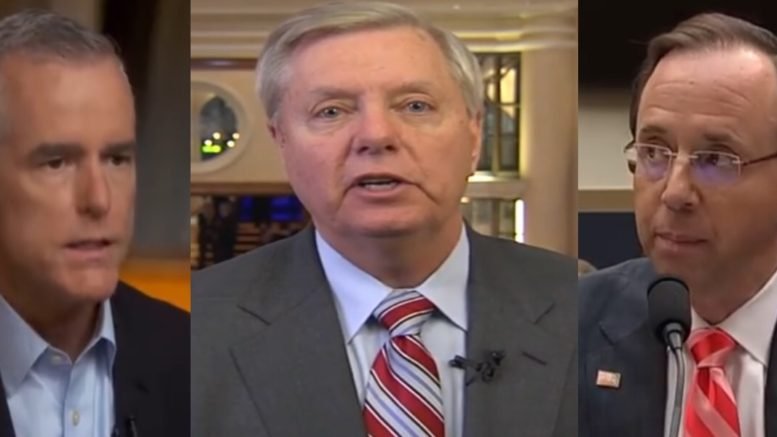 Graham weighed in on comments by former Acting FBI Director Andrew McCabe on the 25th Amendment. (Video Below)

During the interview, Senator Lindsey Graham vowed to hold a hearing to determine whether the Justice Department and FBI officials discussed a bureaucratic coup to remove President Trump from office.

Further, he said he is prepared to subpoena Deputy Attorney General Rod Rosenstein and Andrew McCabe to answer questions about an alleged discussion to use the 25th Amendment to remove Trump from office. “How can I not… if that’s what it takes.” Graham asked.

(Related: Sara Carter Hints How Fmr. Obama Officials Are About To Pay For Their ‘White Coup Attempt’ Against Trump)

McCabe claimed that Rosenstein brought up the idea of using the Constitution to remove President Trump during a meeting of FBI and Justice Department officials on May 16, 2017, around a week after Trump fired James Comey as FBI director. (Video Below)

Sen. Graham said, “We’re a democracy. People enforce the law… can’t take it into their own hands. And was this an attempted bureaucratic coup? I don’t know.

He added, “So I promise your viewers the following: that we will have a hearing about who’s telling the truth, what actually happened.

The South Carolina Senator noted that McCabe was fired from the FBI for making false statements about leaks he authorized to the media. (Video Below)

McCabe is reportedly under grand jury investigation in the matter.

Rosenstein has denied McCabe’s claims, which McCabe lays out in a “60 Minutes” interview that airs Sunday night. The Justice Department has said through anonymous officials that Rosenstein was joking when he broached the idea of using the 25th Amendment to remove Trump. The Justice Department has also disputed another McCabe allegation: that Rosenstein offered to wear a wire during meetings with Trump. Rosenstein has said he was being sarcastic when he made that offer.

“I don’t know who’s telling the truth. I know Rosenstein vehemently denied it, but we’re going to get to the bottom of it,” said Graham.

Roseinstein, who is expected to soon leave the Justice Department, has rebuffed Congress’s requests for him to testify about the allegations regarding Trump.