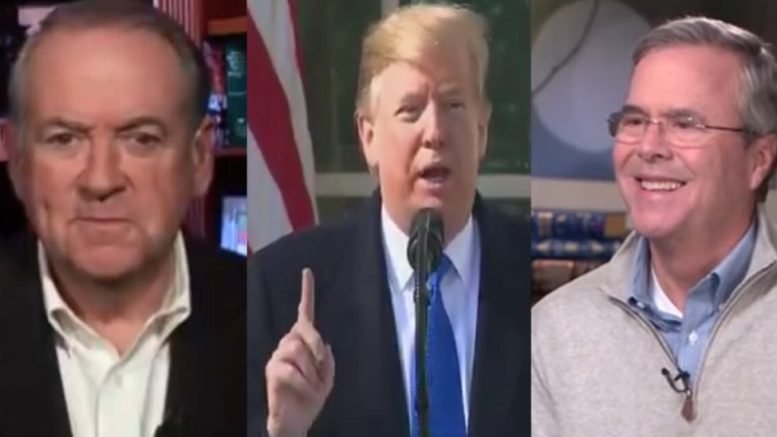 Former Governor Mike Huckabee joined Fox News Saturday evening where he weighed in on the Trump administration’s handling of the crisis in Venezuela.

This comes amid a weekend uprising of unrest in Venezuela as it faces an escalating humanitarian and economic crisis.

“Patience is exhausted, I can’t [bear] it anymore, we can’t keep putting up with Colombian territory being used for attacks against Venezuela. For that reason, I have decided to break all political and diplomatic relations with Colombia’s fascist government,” Maduro said in a speech announcing the diplomatic break, according to Reuters.

The Venezuelan National Guard was shooting rubber bullets and tear gas at anti-Maduro protesters at the border while the protesters attempted to bring humanitarian aid into the country on Saturday. Further, aid trucks filled with medicine and food were caught on fire.

Mike Huckabee said on Friday, “It’s another collapse of socialism and a reminder that it doesn’t work.” (Video Below)

Huckabee added, “Ultimately we see another rich nation turned into an impoverished nation because of socialism and corruption.

Huckabee praised the Trump administration for its strong policy and also pointed out that even Jeb Bush tweeted commendation for President Trump’s handling of the Venezuelan situation adding that “Jeb is no big supporter of President Trump.”

Jeb tweeted, “What triggered the escalation of US-Venezuela policy? http://uni.vi/x8BC101uUIS  via @Univision @dadams7308 Well written piece. President Trump deserves credit for ramping up the pressure on Maduro. As does Senator Rubio for his solid advice to the administration.”

Next Huckabee said of Bernie Sanders (VT-I), “Bernie Sanders has never met a communist he didn’t love. He did his honeymoon in the Soviet Union back in the day.”

Huck noted the Bernie has been caught on camera praising Fidel Castro, praising every communist leader, and often at the expense of the United States. “I’d like to think there are sane and rational Democrats who recognize that Bernie Sanders cannot represent their views and the views of Americans and the views of traditional Democrats who find those ideas utterly repulsive.”

He added, “I hope that people will realize we are blessed to live in the United States. And frankly, we are fortunate to have a President who doesn’t just walk away and turn a blind eye to the horrors that are going on in the socialist Venezuela and is supplying help and assistance to try to get that freedom back to the people.”

What triggered the escalation of US-Venezuela policy? https://t.co/tSBUmr0uPk via @Univision @dadams7308 Well written piece. President Trump deserves credit for ramping up the pressure on Maduro. As does Senator Rubio for his solid advice to the administration.