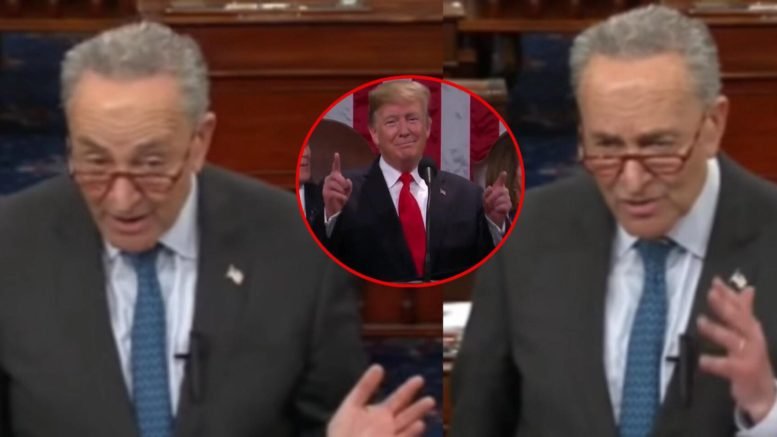 Senate Minority Chuck Schumer (D-NY) took to the Senate Floor on Monday, where his Trump Derangement Syndrome was on full display for all to see, as he called President Trump’s national emergency a “lawless act,” and a “gross abuse of power.”

The House will ratchet up the fight this week when it’s expected to vote on and pass a resolution to block the declaration. Speaker Nancy Pelosi (D-Calif.) told reporters during a conference call that the measure will head to the House Rules Committee on Monday evening and come to the floor on Tuesday. “The president’s act is lawless and does violence to our Constitution and therefore to our democracy,” she said. “We do not have a monarchy; we have a separation of powers in our country,” reported The Hill. (Video Below)

When President Trump was elected, he promised to build a wall to protect Americans and to prevent foreign citizens from entering the country illegally. Despite the President’s efforts, Democrats have continued to refuse to adequately fund the wall, thereby resulting in a national emergency.

Chuck Schumer while speaking on the floor, laid out his reasons why he thinks the national emergency is “so wrong.”

“First, there’s no evidence of an emergency at the border. Illegal immigration has been declining for 20 years.” He said.

Schumer’s statement is baffling, given several comments that he made in 2009 when he declared that illegal immigration is wrong and that constructing a border wall would provide a “significant barrier to illegal immigration.” (Video Below)

Schumer further said, “[t]he American people need to know that, because of our efforts in Congress, our border is far more secure today than it was when we began debating comprehensive immigration reform in 2005. This progress includes … construction of 630 miles of border fence that create a significant barrier to illegal immigration on our southern land border.”

Equally surprising about Schumer’s opposition to the wall is the fact that he, then-Senator Hillary Clinton and then-Senator Barack Obama all voted in favor of the Secure Fence Act in 2006, which authorized approximately 700 miles of fencing between the border of the United States and Mexico. While the fence was a “smaller” project relative to Trump’s wall, Schumer supported it, reported The Federalist. (Video Below)

Chuck Schumer pulled out his democratic tactic playbook on the Senate floor Monday, by trying to pretend that the wall is not needed and said, “Even the President himself, who’s now declaring an emergency, halfway through his meandering speech– proclaiming the emergency said ‘I didn’t need to do this, but I’d rather do it, build the wall much faster.'”

“If there was ever a statement that says this is not an emergency, that’s it. He said he didn’t need to do this! So my colleagues, if we are going to let him do this or any President on a whim declare emergencies simply because he or she can’t get their way in the Congress, we have fundamentally changed the building blocks that the founding fathers put in place.” He whined.

Next, he went on to say that Trump’s emergency declaration “could cannibalize funding from worthy projects all over the country.” He cried, “We don’t even know which projects he’s planning to to take the funds from.”

His third point he made and stated that it beared repeating, “The President’s emergency declaration is a fundamental distortion of our constitutional order. The Constitution gives power to the Congress, not the President.”

“In case the will of the Congress wasn’t already clear, soon it will be made so. The obvious remedy to President Trump’s outrageous and lawless declaration is for Congress to vote to terminate the state of emergency. The House will vote on on such a resolution tomorrow and the Senate will soon follow suit.” Schumer said.

He added, “This vote on the resolution to end the state of emergency will test our fidelity to those principals. Congress should come together in a bipartisan fashion. We’ve come together before in bipartisan ways. If there was ever one that cries out for bipartisan rejection of overreach of power, this is it. And we should reject this naked power grab, this defacement of our Constitution balance of powers for what it seems is largely political purposes.”

President Trump, before he left for Vietnam on Monday to meet with Chairman Kim Jong Un, took to Twitter ahead of Tuesday’s democratic obstruction vote– where they will try to terminate the national emergency.

President Trump wrote, “I hope our great Republican Senators don’t get led down the path of weak and ineffective Border Security. Without strong Borders, we don’t have a Country – and the voters are on board with us. Be strong and smart, don’t fall into the Democrats “trap” of Open Borders and Crime!”

Then he quoted Fox Business’ Stuart Varney and said, “Why on earth would any Republican vote not to put up a Wall or against Border Security. Please explain that to me?”

Why would Schumer take such a drastically different approach in 2019 when he voted for border barriers and fencing before? This is just another Democratic obstruction move to stop the President from keeping his promise to the American people. Shouldn’t the safety and security of the American public be worth more than the hurt feelings of these swamp rats?

I hope our great Republican Senators don’t get led down the path of weak and ineffective Border Security. Without strong Borders, we don’t have a Country – and the voters are on board with us. Be strong and smart, don’t fall into the Democrats “trap” of Open Borders and Crime!

“Why on earth would any Republican vote not to put up a Wall or against Border Security. Please explain that to me?” @Varneyco