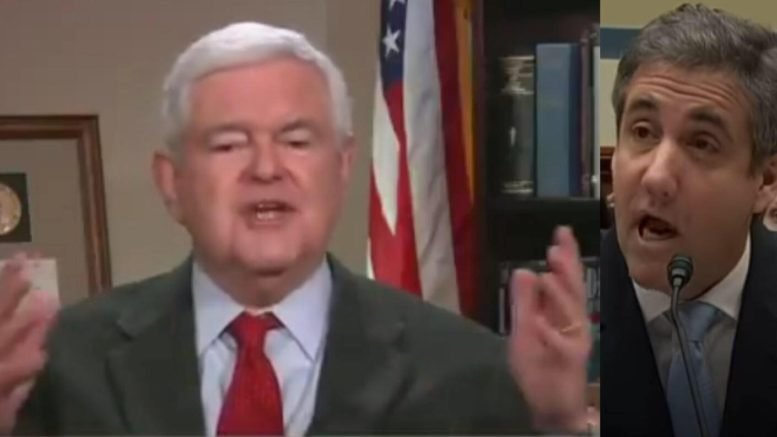 Former speaker of the House, Newt Gingrich, joined host Stuart Varney Fox Business Thursday, where he weighed in on the aftermath of Michael Cohen’s testimony before the House Oversight Committee on Wednesday.

Gingrich further, slapped down the media for their obsessive coverage of a convicted liar, rather than focusing on President Trump while he was overseas in Vietnam trying to make world peace. (Videos Below)

During his interview, Newt Gingrich explained that the media has given little coverage to the very serious events that are unfolding around the world.

“This entire, sort of, vomiting on the public, which is what Cohen did yesterday, was orchestrated by Hillary Clinton’s closest friend.” He said.

He added, ” I think the average American looks at all of that and says ‘shame on the media’, and they just go on with their lives.” (Videos Below)

Newt further pointed out that Americans know who President Donald Trump is and the aftermath of the hearing won’t effect poll numbers.

“He’s unbeatable in the Republican party. He’ll be the nominee in 2020.”

He explained that the economy had a better than expected growth last quarter, the President created more jobs and more. “But that doesn’t count, because we have to listen to some convicted liar.” Newt said slamming the media. (Videos Below)

The media has given little coverage to the very serious events unfolding around the world. However, they've spent hours trying to convince us that a convicted liar, who is being instructed by a Clinton crony, should be taken seriously. pic.twitter.com/JkW1ylWlfS