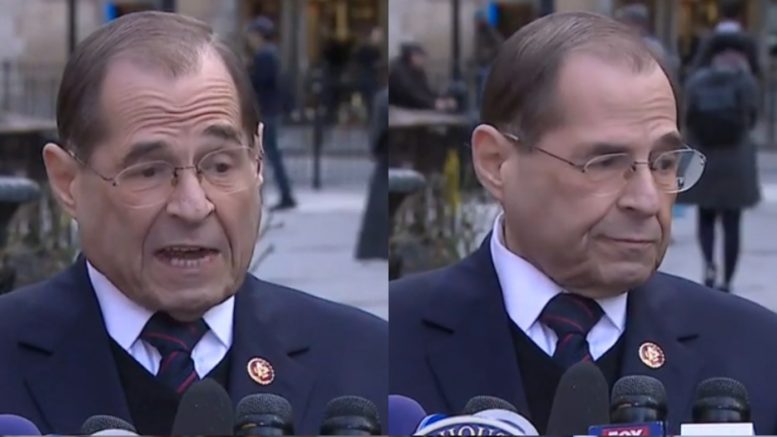 Rep. Jerry Nadler is having a rough day following news that Robert Mueller’s team found no proof of collusion by President Trump’s campaign, and that there was not enough evidence to prove obstruction of justice occurred.

The findings go against the narrative that Democrats, with help from the media, have been trying to push upon the American people for a very long time.

Nadler faced the press not long after the findings were released by Attorney General William Barr.

During the press conference, Nadler called on Mueller’s report to be released in full and for Barr to appear before the House Judiciary Committee.

In an interesting twist, however, a bystander interrupted Nadler’s big moment as he could be heard calling Nadler and his Democrat colleagues “a bunch of losers.” Video Below

Nadler was voicing his concern that the President could exercise executive privilege, when a gentleman in the background yelled, “Nadler, you guys are a bunch of losers!”

With his train of thought clearly rocked, Nadler tried not to let being called a ‘loser’ bother him and pressed on. But the man in the background unleashed another jab.

He said, “You guys lose again! You lose again, Nadler!” Video Below

EPIC! Nadler taking questions from the press gets called out and told what Americans really think of his grandstanding efforts led by him and his gang of obstructionists. “Nadler, you guys are a bunch of losers!” pic.twitter.com/3Hl6HjgHhM

Here is the full version of Nadler’s speech: