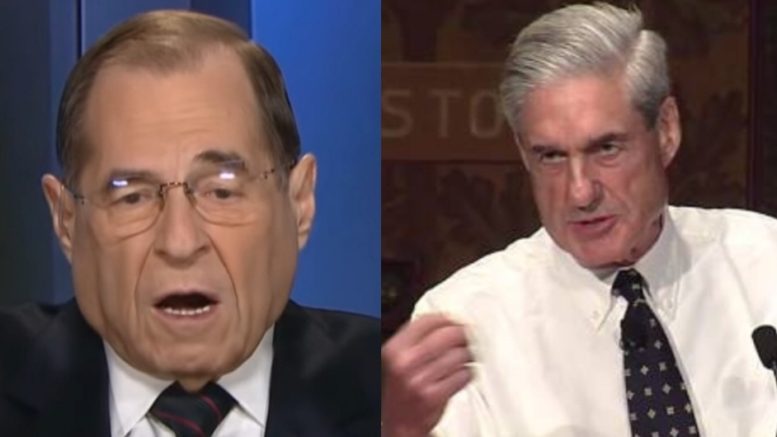 This comes after Special Counsel Robert Mueller submitted to Attorney General Bill Barr his long-awaited report on the investigation into Russian meddling in the 2016 presidential race and possible collusion with Trump associates — marking the end of the politically explosive probe and the beginning of a new battle over its contents and implications.

Chris Wallace asked Jerry Nadler on”Fox News Sunday”, “We know that the Justice Department said the Special Counsel is not recommending any new indictments. That means that no one will have been, or has been, or or will have been charged with collusion with the Russians, and President Trump couldn’t clearly do that himself. So in effect, isn’t it a logical assumption that the Special Counsel did not find criminal collusion with the Kremlin?”

Nadler “We know in plain site of a lot of collusion,” Nadler insisted several times during the segment.

Nadler listed the Trump Tower meeting, which has been the subject of numerous false reports, and he added that the campaign manager gave political targeting data to an agent of the Russian government to help in the election. “Maybe it’s not indictable, but we know there was collusion.”

Wallace stopped him in his tracks pointing out that Donald Trump Jr., Paul Manafort and Jared Kushner were not charged. “So it would seem there was no criminal collusion among them and it would clear the President.” (Video Below)

Nadler refused to admit that Wallace was right and said, “we need to see the report so we can see what the special prosecutor says. Right now it’s very speculative.”

Asked what is he prepared to do to get all the information he wants, Nadler said, “If a President cannot be indicted because of as a matter of law, then the only way a President can be held accountable is for Congress to consider it an act if warranted, and Congress can only do that if it has the information.”

He added, “For the [Justice] Department to take the position that ‘we’re not going to give information because he’s not indicted’, like a normal person who is not indicted because of lack of evidence, is equivalent of a coverup. The President cannot be above the law. We will use subpoenas if and when we have to.” (Video Below)

Wallace asked Nadler, “You have made it clear you are going to keep investigating the President regardless of what is in the Mueller report. If the Special Counsel after two years does not find criminal activity by the President after this long investigation on collusion or obstruction of justice, how do you think the American people will react to House Democrats continuing to investigate the President for the rest of his time in office? I understand why it might be good politically, to keep him under a cloud… but is it good for the country, sir?”

When asked about the overach and the misdeeds of the FBI, Nadler squirmed in his chair and tried to play off the corruption that occurred under Obama’s Justice Department.

“Do you have any intention of investigating them sir?” Wallace asked.

Nadler claimed that when the Republicans controlled the House, they conducted an extensive investigation and he added that “nothing relevant was found.” (<—- HE ACTUALLY SAID THAT!!!)

“Yes, it turns out some FBI agents have political opinions… they didn’t like the President.” He further said that he didn’t see any necessity for further investigations pertaining to what happened with the FBI, the DOJ as it related to the dossier and spying of the Trump campaign.

Then, he dodged the subject to place blame on Trump for firing James Comey and lied through his teeth while spitting out Democrat talking points. (Video Below)