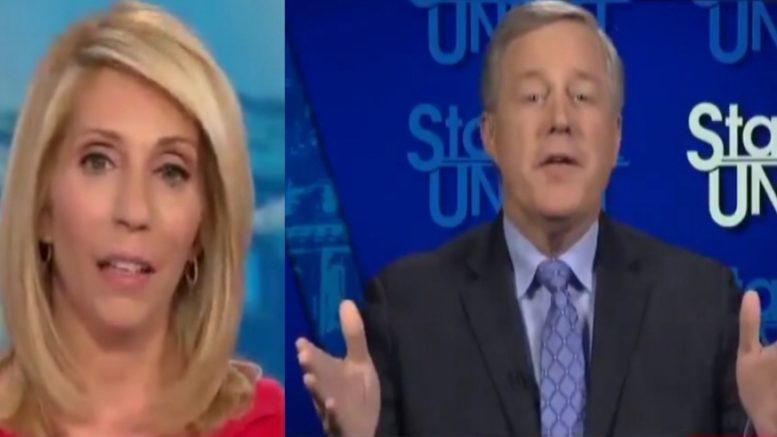 Laying out the facts and unafraid, Congressman Mark Meadows (R-NC) walked into the lion’s den on Sunday where he took on host Dana Bash during a segment of CNN‘s “State of the Union”.

This comes after Special Counsel Robert Mueller submitted to Attorney General Bill Barr his long-awaited report on the investigation into Russian meddling in the 2016 presidential race and possible collusion with Trump associates — marking the end of the politically explosive probe and the beginning of a new battle over its contents and implications.

Rep. Mark Meadows has brought to light the truth of exactly what happened during the 2016 presidential election, along with his colleague, namely Rep. Devin Nunes (R-CA), who led the effort to put together a four-page memo last year that exposed all of the crookedness used by the Department of Justice and the FBI in a bid to wiretap Trump campaign official, Carter Page.

Congressman Meadows explained to CNN’s Dana Bash that he doesn’t believe there should’ve been a special prosecutor. “I’ve been consistent with that since day one,” He said.

As Meadows went more into detail to spell out exactly what CNN won’t report, Dana Bash squirmed around in her seat while Meadows turned the tables on the Mueller report and laid down the facts. (Videos Below)

“We do know that there was bias at the Department of Justice, early on.” Meadows affirmed.

“In fact, they were talking about a special prosecutor before James Comey was fired, and yet, here we are today, 22 months later– talking about something, after spending tens of millions of dollars on a narrative that Democrats …. they said this President colluded with the Russians. In fact, some even went as far to say he was an agent, which is just ludacris!” He fired off.

Then Meadows declared, “We have to go after the bad guys, which is Russia and not the President of the United States!” (Videos Below)

Bash asked Meadows, “Will you concede that it will be inconsistent when this report comes out for Republicans to talk about in vindicating the President any way, shape, or form if they called it a witch hunt not necessary in all the things you just said?”

Meadows shot back and said that he didn’t know how it would be inconsistent. “We said there was no collusion, and yet, Sunday after Sunday, Adam Schiff, Jerry Nadler and others said ‘oh, there’s evidence, there’s collusion. And yet, what we find is an independent investigator has said there’s no indictments. You can’t have it both ways.” [Emphasized]

“I’ve been consistent in saying this President did not collude, and now, it appears the facts will support that assumption.” He noted.

Asked if he would support a subpoena to get the complete release of the Mueller report, Meadows responded, “I don’t know if we’re going to need a subpoena, because Attorney General Barr has indicated he is going to do as much as he possibly can, within the confines of the law, to not only inform Congress, but inform the American people.”

He pushed back at Democrats who are grandstanding and proclaimed that he finds it “really rich” that the same people who are yelling for transparency, are the same ones who didn’t want anyone to know that Fusion GPS was hired to dig up dirt on President Trump.

“They didn’t want the Nunes memo released. I was one of the few that said release the Republican and Democrat memo.” Meadows disclosed. (Videos Below)

“We need to make sure that we protect the innocent here but at the same time, be transparent and make sure that the American people know the truth,” Republican @RepMarkMeadows says when asked about publicly releasing the Mueller report & evidence. #CNNSOTU https://t.co/SlainVzQJr pic.twitter.com/fddLkWgKWs